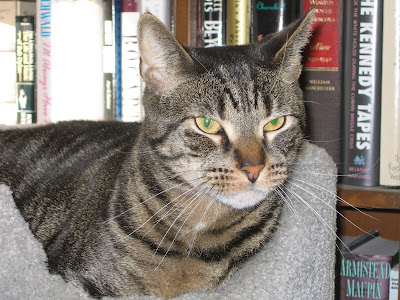 Baxter here. I am feeling a bit Grumpy. Not only didn't I get to Blog for Much Too Long, but I had to sit through that Debacle called the Republican Convention two Nights in a row.

Usually my Humans sit out on their Deck for the Evening in the warm weather and leave me to my Own Devices. Well, Wednesday and Thursday evenings they sat Inside and watched the Convention. They were both Curious about this Palin Human that was chosen by the one called McCain to be his Sidekick. Wednesday Evening I joined them for the main Reason that they were eating Salmon for Dinner. And I really like Salmon. So I sat in my Female Human's Lap and cadged some Salmon while we watched the speeches.

The first one was by that Guiliani Human. What a crass fellow HE is. No self-respecting Cat would have said the Obnoxious things he did. He spent his whole time making Fun of the Obama Human. He went on so long I'm surprised they didn't pull him off the Stage with a Hook. But the Crowd ate it up.

Then the Palin Woman finally came on. She wasn't any better. She babbled on about her "Executive Experience" running a State that has a Population less than most major Cities in New Jersey. My Female Human says when she reads about what her "Experience" consisted of, it reminds her of the small-town Politics in the Town we live in (which has almost 10 times the Population of the Town where the Palin Woman was Mayor in the 1990's).

And then the Palin Woman had the Nerve to make fun of the Obama Human too! Talking about him being a "Community Organizer" as if that was a Bad Thing. I'm only a Cat, but aren't the Republicans the ones who tout their "Family Values"? Isn't helping the Community a good Value?

You may notice I am not calling her the Palin Human. I haven't quite Decided whether she IS Human or not. She may be some kind of Doll that walks and talks. The speech she gave sounded Suspiciously as if it was a Script coming out of her mouth in many places. Maybe it was recorded and then they pull a string in the back of her to make her talk?

The whole Scene left a bad taste in this Cat's mouth that all the Salmon couldn't wash away. Some of you have likened it to a Nazi Rally. I have seen Nazi Rallies on the History Channel (yes, we Cats really ARE watching the Television while we sit there next to you purring). And I can see the Resemblances, which is a Scary Thought.

My Female Human felt it was highly immature, juvenile Behavior, and a Stark Contrast to the Democratic Convention from last Week. Chanting "Drill, baby drill!" and "USA, USA"? What is this, a High School Pep Rally?

As a Cat, I have my own Perspective on it, which is, of course, why you come here to read my Posts. After all, it's always good to have another View of things, right?

To me, it reminded me of a Pack of Dogs in a fenced yard, seeing a Cat on the other side of the chain link fence. They can see the Cat, smell the Cat, but they can't get the Cat. But that doesn't stop them from barking, yapping, slobbering and jumping at the fence. They're Stupid, you see. And the Cat knows they can't get him, so he sits there and washes his Face and ignores the Dogs, which makes them even Madder. They taunt the Cat, tell the Cat what they'll do to him if they get him, but it is all Noise.

The only thing the Cat has to worry about is if the Fence falls down. Then no matter how Stupid and full of Bluster the Dogs are, a Pack of them can run that Cat into a Corner and kill it.

Right now the Fence is the Unpopularity of the current Government which has been run by the Republicans for 8 years. If the McCain-Palin Combination manages to Convince the American Public that they really ARE "Mavericks" - the Fence will start to weaken. So the Cat needs to be ready if that happens and have a Plan to Fight Back in order to Outwit the Dogs.

The last night of the Convention the McCain Human spoke. But first they had a long Dramatic Video about his Life, with a Lot of Emphasis on his family's Military Service and then his own. It was very Inspiring. However, it reminded me of watching those really old Films on the History Channel. The ones that are from so Long Ago that they're scratchy looking and sepia-toned. It felt like Ancient History.

Then when the McCain Human shambled on to the Stage, he didn't make up for that image. At one point he mentioned remembering when Pearl Harbor was Bombed. This Human is seriously Old!

At least his Speech wasn't devoted solely to bashing the Obama Human. But it was very rambling and disjointed - and his Audience kept interrupting him with "USA USA." What is up with that? Don't they WANT to hear their own guy speak? Maybe not, a lot of them looked Bored.

The really ironic thing was when he vowed to end "Partisan Rancor." After that Display the night before? Who is he Kidding?

I have to tell you, this Cat is already Exhausted and we still have 2 Months to go! Let's hope this Election turns out the way we Hope.

Then maybe I can get back to reporting Important News, like kittens born with four ears (which apparently is not all that uncommon.)

I think in the meantime I'll load up on the Catnip, and leave you with this, from YesWeCanHas.com. 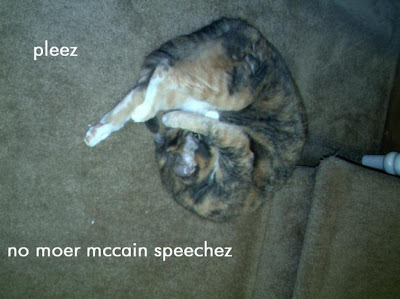 Heh heh. Seems like McFossil's speechifyin' wasn't enjoyed by too many folks, human or feline. I don't know, I think he'd make one hell of a talking zombie.

I think he's been disassembled and remade with plastic for face skin. I wonder if they have a plastic surgeon that lives in their dungeon. Scary people.

Baxter, you are such a wise cat that I am certain one of your ancestors must have been an adviser to Pharoah.

Plus, you look very much like the first cat I ever had, so I like looking at your photos.

Oh Baxter, can you be part of Obama's cabinet?

I want them to win and you to be a part of it.

Those Republicans are more dangerous than a pack of dogs, I'm afraid. In order to make more money or get oil, they kill dogs, cats, and humans that get in their way.

I'm sure a cat is smart enough to avoid them.

thanks dear kitty - you nailed it..all of it...

Such a smart cat, with such astute observations.

I don't think I would have wanted to make a snarky speech like that in front of my kids.

Ahhh, Baxter seems to have been talking to my bunch over here. He is dead on in his analysis. His humans must be pretty smart too, since cats don't waste time hanging around dummies. LOL. Good post.

Baxter, you are a wise cat.

Randal, you said it. Even his Audience couldn't stay Awake.

Utah, not far from the Truth with all his surgery for Melanoma.

Ruth, I am so glad you enjoy my Photos. I am sure I am indeed Reincarnated from Ancient Egyptian Nobility.

FranIam, I purr with your Flattery! I would indeed accept a Cabinet Post if offered. He could do Worse.

Dave Dubya, you are right of course. Dogs are not Evil and Stupid. They are just being Dogs. These people are both Stupid AND Evil.

Thank you, Enigma. I try to do my Best.

DCup, that is something I had not thought of. What a poor Example she is to her Kittens!

Kevin, LOL! Also Media Frustration! My Female Human's mother told us that CNN has been doing nothing but play the Story of McCain's Inspirational War History this week. Ugh.

Thank you, Feather. I appreciate your Support!

Maria, purrs to you as well! And I do love the New Look of your Ativar. Diva would also enjoy it!

sorry, I'm just finally catching up here & wanted to let Baxter know I wish he had been at my house to interpret the RNC events. the only non-human we had in the house was an old deaf dog & he didn't see any reason to watch the nuremberg crowd. he wouldn't have minded some salmon, though!