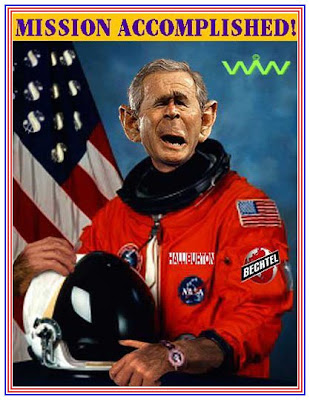 This post is one of many that are part of the March 19 Blogswarm. Please go there and read all the other posts about the War in Iraq as well.
***

Today is the anniversary of our invasion of Iraq. Although President Bush declared in 2003 that the mission in Iraq had been accomplished, his words were lies, just as the reasons for going into this war in the first place were lies. This is what he said in his speech on the aircraft carrier in May of 2003 after his staged theatrical landing on the U.S.S. Lincoln. His words are in blue italics (in bold for emphasis on my part) - my commentary in bold red.

"Major combat operations in Iraq have ended. In the battle of Iraq, the United States and our allies have prevailed. And now our coalition is engaged in securing and reconstructing that country.

(According to a recent Red Cross report, "...the humanitarian situation in most of the country remains among the most critical in the world. Because of the conflict, millions of Iraqis have insufficient access to clean water, sanitation and health care.")

...Today, we have the greater power to free a nation by breaking a dangerous and aggressive regime. With new tactics and precision weapons, we can achieve military objectives without directing violence against civilians. No device of man can remove the tragedy from war; yet it is a great moral advance when the guilty have far more to fear from war than the innocent.

(Iraqui deaths are now at nearly 1.2 million - including many, many civilians - see this link for more details).

We have difficult work to do in Iraq. We're bringing order to parts of that country that remain dangerous. We're pursuing and finding leaders of the old regime, who will be held to account for their crimes. We've begun the search for hidden chemical and biological weapons and already know of hundreds of sites that will be investigated.

(Of course, the CIA reported no WMDs were found....
"WASHINGTON (CNN) -- Saddam Hussein did not possess stockpiles of illicit weapons at the time of the U.S. invasion in March 2003 and had not begun any program to produce them, a CIA report concludes." )

We're helping to rebuild Iraq, where the dictator built palaces for himself, instead of hospitals and schools. And we will stand with the new leaders of Iraq as they establish a government of, by, and for the Iraqi people.

(The government isn't going so well. "The Iraqi government says a lack of trust between politicians is slowing progress on national reconciliation. Critics have warned the government needs to start providing much needed social services to Iraqis or risk losing recent security gains.")

...The battle of Iraq is one victory in a war on terror that began on September the 11, 2001 -- and still goes on. That terrible morning, 19 evil men -- the shock troops of a hateful ideology -- gave America and the civilized world a glimpse of their ambitions. They imagined, in the words of one terrorist, that September the 11th would be the "beginning of the end of America." By seeking to turn our cities into killing fields, terrorists and their allies believed that they could destroy this nation's resolve, and force our retreat from the world...

(Of course, none of them came from Iraq).

The liberation of Iraq is a crucial advance in the campaign against terror. We've removed an ally of al Qaeda, and cut off a source of terrorist funding. And this much is certain: No terrorist network will gain weapons of mass destruction from the Iraqi regime, because the regime is no more.

(Of course, before we invaded Iraq, Al Qaeda wasn't in Iraq, according to a new Pentagon report that the government tried to keep us from seeing.)

But there are plenty of terrorists, including Al Qaeda, there now, thanks to our illegal overthrow of the Iraqi government. And where are they coming from? Lots of other countries that we aren't bothering to invade, because they are our "friends."

I won't even go into the many lies told by Cheney and others to make us believe in the WMDs, or to warn against the recent build-up to possible war with Iran on the same kind of false pretenses.

Let's remember it is all about oil and paybacks to corporate cronies like Halliburton, and let's make sure it never happens again by electing a Democrat in November!
Posted by Mauigirl at 3/19/2008 03:53:00 PM

Good one Mauigirl..you hit one out of the park with this post.

I hope with all my heart and mind that we will elect a Democrat in Nov..but the more infighting there is..the less I think that will happen. :(

Many People are so rabid about either Hillary or Obama..and that gives Weathervane McCain more ammo in the long run.

Dusty, thanks - and I agree that all the infighting is not helping. I hope the nomination is settled soon but it doesn't look likely.

McCain's sole exixtence in the remaining days of his deranged elderly life is to launch the Ultimate War of Wars.

Thanks, Mauigirl...we must elect a Dem in the fall or...

My main blog is:

I have a poetry blog also:

And my wife and I have a photography website with 15 galleries at present - covering Paris, New York, Minnesota, and lots of Florida...

You might enjoy all of the above as I have enjoyed your blog.

Today, he continued to talk about Al-Qaida in Iraq, Al-Qaida, and Saddam, as though they were/are a single entity.

And no one ever calls him out.

Great post and I agree with dusty, all Democrats must come together and take back the White House.

We can never allow McCain to take over where Bush has left off.

Let's hope that either our vote actually gets tallied or that an election actually happens.

I will support whoever gets the democratic nomination -- we must keep McCain out of the White House! (And his little dog, Lieberman, too!)

I will be so glad when "W" is out and a Democrat is in. We need to get out of this war and get the economy back where it belongs before we are so far down that any terrorist group will be able to just come in and buy us out. They wanted our economy to fail on 9/11 and that didn't happen, but Bush has just totally ignored what was going on here because all he cares about is that damn war. The entire world hates him.

Thanks, all, for your comments, and Jacob and Kaywag, welcome! I'll be sure to check out your blogs as well.

Kaywag, you are right about the economy, it is a serious problem.

Fairlane, I think no one bothers to call out Bush on his lies and innuendoes because everyone is just so sick of him he isn't even registering anymore. No one believes him and he is no longer relevant. Sadly, he's still in charge.

Randal, I share your concern about this - I hope there won't be another stolen election.

I have a diary up at KOS about the forgotten victims of Bush and Hillary's Iraq war.

An estimated 650,000 innocent Iraqi citizens -- a third of whom were children, have been killed since the U.S. invasion of Iraq.

Interesting how both Bush and Hillary love to wrap themselves around the little darlings but they can look the other way when Iraqi children are slaughtered?

It's taking me awhile to get to all the the March 19 Blogswarm posts!

As you said, let's elect a Democrat and keep McCain from continuing this war.

Hello. This post is likeable, and your blog is very interesting, congratulations :-). I will add in my blogroll =). If possible gives a last there on my blog, it is about the Câmera Digital, I hope you enjoy. The address is http://camera-fotografica-digital.blogspot.com. A hug.

Hi, Mauigirl,
I am on my blogswarm tour and want to say I appreciate your post. The map tells a story.

Damn! Didn't even know about the blogswarm. Ah well, I was a day late anyway. This is what happens when you have nothing left to say about Bush's War. I now just let my Kommandos do the talking.

First, I could barely get past the first picture.

It feels like screaming in the wind, but we just cannot shut up about this. We can't. That's what they want us to do. And we cannot.

bush, cheney, mccain keep talking about winning -- with never defining what winning is.

the marketing and talking points of this war would NOT have been successful with a total enabling of the MSM.......

i fear that even a total dem sweep in Nov wont extract us from this debacle anytime soon -- bush has seen to this as well.

MG - Thanks for breaking this down for us, and sorry for getting around to it so late. This post really exposes the bullshit inherent in Bush's speech. BTW...mission accomplished is now at 4,000+ dead servicemen and women.

mauigirl, the map does tell the story.

Thanks, all, for all your comments! I'd answer you each individually but am running out of time this week - too much going on! And I'd rather take the time to visit your blogs!

We must keep fighting this administration and working for a Democratic victory in November! I know it will be hard to get out of Iraq but there has to be a plan to do so - and this idiot won't even make one.