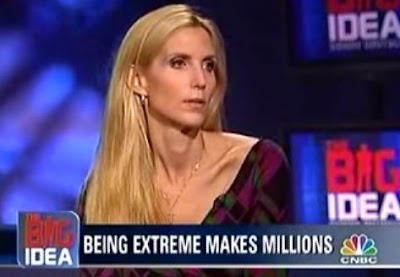 In view of the discussion on the return of Imus to the radio and the many valid comparisons of his brand of hatefulness to the hatefulness of other radio personalities (Limbaugh, Hannity, et al), I thought I'd write today about why it is so important to continue to speak out against these people.

Free speech should never be curtailed. But we must speak out against those whose free speech is akin to shouting "fire" in a crowded theater. They are making intolerant, hateful speech part of our culture. As Tomcat said in his comment on the Imus post, "Bush, the GOP, the neocons and the theocons have made hate mainstream." And this is the real danger of this type of free speech. It makes hate acceptable in our culture.

While we were in the Adirondacks two weekends ago, Leonard Pitts, who writes a syndicated column for the Miami Herald, had a very interesting op-ed piece that was published in the local town newspaper near where we were staying.

His article concerned the remarks Ann Coulter had made about Jews on a recent program:

"Last week, Coulter said that in her perfect America, everyone would be a Christian. She said this to Donny Deutsch, who was hosting her on his CNBC program, The Big Idea. Deutsch, who is Jewish, expressed alarm. Whereupon Coulter told him that Jews simply needed to be ''perfected'' -- i.e., made to accept Jesus as savior. Which is, of course, one of the pillars (along with the slander of Christ's murder) supporting 2,000 years of pogroms, abuse and Holocaust."

Pitts said that many people would be telling him he shouldn't be wasting his time condemning Ann Coulter, and that it would be better to ignore her. But he refuted this idea, saying:

"I suspect the reason some people believe that kind of ignorance is best ignored is that they find it difficult to take it seriously, or to accept that Coulter -- or those who embrace her -- really believes what she says. After all, this is not 1933, not 1948, not 1966. It is two-thousand-by-God-oh-seven, post-Seinfeld, post-Gore-Lieberman, post-Schindler's List. We no longer live in the era when open anti-Semitism could find wide traction. This is a different time.

But time, Martin Luther King once observed, is neutral. Time alone changes nothing. It is people who make change in time. Or not. So you have to wonder if this determined sanguinity in the face of intolerance is not ultimately an act of monumental self-delusion."

Pitts went on to say that in fact, letting remarks like Coulter's pass without protesting them, without shouting out that they are wrong, will just give the impression that this type of hatefulness is acceptable in society.

"While some of us are cheerfully assuring one another that They Don't Really Mean It, the Southern Poverty Law Center reports that the number of hate groups in this country has risen by a whopping 40 percent in just the last seven years. If you had spent those years, as I have, jousting in print the agents of intolerance, you would not be surprised. It would be all but impossible to quantify, but I've noted a definite spike, not simply in the hatefulness of some people, but in the willingness to speak that hatefulness openly and without shame. What used to be anonymous now comes with a name and address.

Like Coulter, many of those people find intellectual cover under the cloak of conservatism. It is a development that thoughtful conservatives (the very need to use that qualifier makes the case) ought to view with alarm. For all that Colin Powell, J.C. Watts, ...and others have done to posit a friendly new ''big tent'' conservatism, Coulter and others have done even more to drag the movement back toward open intolerance.

That will be read as criticism of conservatism, but I intend a larger point. After all, liberalism has had its own unfortunate extremes -- the drug use of the '60s, the Weather Underground, the Symbionese Liberation Army and the like. The difference is, say what you will about Michael Moore or Jesse Jackson, they are not pushing back toward that which has been discredited. Coulter is.

And if some of us are laughing that off, not everybody is.

So this is not about bashing conservatives. It is, rather, about challenging them, and all of us. Within living memory, we have seen Jews in boxcars and blacks in trees and silence from those who should have been shouting. They pretended it wasn't happening until it already had.

So, what about Ann Coulter? What about the push-back against diversity, pluralism and tolerance, that she represents? I keep hearing that we should just ignore it.

Unbelievable! She is outrageous.

"And this is the real danger of this type of free speech. It makes hate acceptable in our culture."
You summed it up very well. We have racial hate crimes, gay hate crimes, etc., but yet there are no religious hate crime laws, and the mention of same would be met with howls of protest!!

This goes back to what I've been screaming for so long: Fundamentalists are NOT Christians. They hijacked Christianity in 2000 as a facade to hide behind, and I think people are finally starting to figure that out. Now the big question is: is it too late? The MSM has given them the cloak of respectability, and that will be difficult to dislodge.

While Coulter is indeed full of hate, I've wondered for a long time, how much of that is "cultured" so to speak, to sell her books, and keep her name on the TV. Her TV appearances aren't made for free, keep in mind. She gets paid for them.

It's somewhat like Don Imus, although he's minor, compared to the Coulters of the world. I met Imus one time, in a social setting. He was warm, friendly, well mannered, and respectful. And this wasn't a fund raiser for his ranch or anything else, just a social party. To see/hear him on the air, you'd think he's a Neanderthal!

Future, I have no doubt that much of both Coulter's and Imus' public personas are phony in order to make money. But to me that makes them even worse; because their followers follow along with what they say, even if it isn't sincere. They don't know any better.

Ah, the Niemoller prayer. I love it--and try to live by it.
Ann Coulter is one of my button issues--I can not tolerate her extreme expression of absurd views.

KGMom, I agree, Ann Coulter is one of my pet peeves too. She is so outrageous it's hard to believe she means what she says and it also amazes me to realize people agree with her. That is the truly scary part.

Thanks for the hat-tip, Maui.

I agree that there should be no censorship of debate, but that freedom must be limited to debate about issues, including the public personas who make their living by those issues. For example, I have no problem with jokes about toe-tapping Larry Craig of Dollar Bill Jefferson, but if we condemn Craig, because he is gay, instead of because he is a hypocrite, or Jefferson, because he is black, rather than because he's a likely crook, that steps over the line. A blogging friend of mine, Lydia Cornell, criticized Coulter publicly, because of her views. Coulter responded by publishing Lydia's home address and telephone number online for harassment by her following of crazies. One of the most dangerous aspects of hate-mongering speech is that, although financial gain may be the speaker's primary motive, such people attract a following of deranged people who just might act on the hatred.

I still say Malkin is worse because being a minority she gives the Wingnut's racist ideology the appearance of credibility.

That poem by the Pastor says it all.