More Eloquence from our Fearless Leader - and Some Scary Stuff 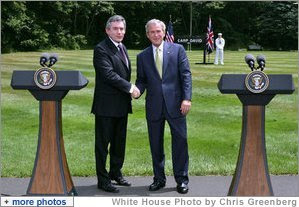 Tonight on the Daily Show, Jon Stewart showed a clip of "W" talking about the new Prime Minister of Great Britain. I looked it up on the White House website and found it was taken from the Q&A period at the press conference today. Here are the exact words:

Q: Mr. President, what you think has actually changed with the arrival of Gordon Brown instead of Tony Blair?

PRESIDENT BUSH: Oh, what's changed? He's a Scotsman, kind of a -- he's not the dour Scotsman that you described him, or the awkward Scotsman; he's actually the humorous Scotsman, the guy that -- we actually were able to relax and to share some thoughts.

The "dour Scotsman?" As Jon Stewart quipped, why not the "pennypinching Scotsman"? Sigh...I can't even express the embarrassment I feel every time the man opens his mouth.

Also? Did you hear about this?

Yes, that's right, when you fly they're going to start tracking your ethnic background, religion, political views, sexual orientation, and more - supposedly to fight terrorism. It's an agreement the U.S. has just made with the European Union.

First of all, I'd like to know how they will even find out any of these things in a typical airline transaction.

"Hello, sir, passport, please?"
"Here you go."
"Sir, I have a few questions. First of all, did you pack your own luggage?"
"Yes."
"Are you gay?"
"Uh, why do you ask?"
"Security reasons."
"Actually, I'm not."
"OK, thank you. Are you a Democrat?"
"Well, yes."
(Flight attendant marks passport with large black "X" and enters, in red, the word "Liberal" into computer).
"Please state your religion."
"Um, Quaker."
(Flight attendant marks passport with another "X" and enters "anti-war activist" into computer)

And it could go on from there...

Do we really believe that our government will use this information only "where the life of a data subject or of others could be imperiled or seriously impaired," as the agreement states?

Does anyone in their right mind actually trust the government to use this type of personal information properly? I thought not.

This is a very scary time. And it is a long time until January of 2009 when we can finally get rid of this administraton. Too long. 539 days too long, in fact, but who's counting? Oh that's right - I am. (See my counter at the bottom of my blog).

It is scary that they will now take every tidbit about your life, in order for you to fly.

Big Brother is not upon us, it was bypassed by something far worse.

I think Martial Law is coming.

Thank you for posting this great article. Oh you don't even want to get me started on Emperor Bush. With so many people in an uproar over his leadership I only hope that drastic changes will come soon for our sakes and our children.

((HUGS)) AND MUCH LOVE ALWAYS!

Larry, I only hope we can get rid of this fascist regime soon enough to prevent martial law. Do you ever wonder whether they might just refuse to step down?

Beverly, I adore Jon Stewart. I learn more on that show than I ever do on the regular news!

How long will it be before promises of oil revenues turn Brown into another Bush lapdog!

I wrote about the deciders screw ups too. Makes me want to smack him sometimes. No, all the time.

Now lets all join hands and sing the praise of our Lord and Fuhrer!