Fighting the Rat of Death 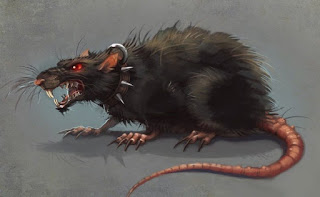 It's been a rough year. First Baxter was sick and we weren't sure if he was going to make it - thankfully, as he explained in the last post, he is doing well.

Then my mother-in-law, who has dementia and has been in a nursing home for nearly 8 years, started declining rapidly, after being relatively stable for a long time. Looking back, we realized she had been declining all along, but so gradually we didn't really notice it until this year. By June she had forgotten how to swallow properly and had started getting recurrent cases of aspiration pneumonia. Finally, she wasn't able to eat at all. DH's father made the decision to have a feeding tube inserted to enable her to continue to eat. "I can't just starve her," he said.

DH and I had looked into this back in 2005 when my own father was in a nursing home with dementia and was no longer able to swallow. All of the literature we read online and elsewhere said that inserting a feeding tube when someone has dementia and has lost the ability to swallow does nothing to prolong life and just results in numerous, constant complications.

Unfortunately, after 67 years of marriage, in the end, DH's dad couldn't let her go. He wanted just a few more months with her. So, the feeding tube was inserted after a few days of angst and tears on all sides. (Except for my mother-in-law, who, thankfully, had no idea of the drama circling around her). She hasn't been able to speak, other than occasional grunts or simple yes or no answers, for years, and at this point she was hardly even doing that, and was sleeping most of the time.

Next came a problem with our 13 or 14-year-old dog Diva. We adopted her 10 years ago, but were never really sure how old she was at that time. Given her arthritis and very grey muzzle, we are thinking she may have been as old as 4 when we adopted her, making her 14 now.

We started to notice changes in her behavior over the summer. She gradually stopped coming upstairs to sleep on our bed, preferring to stay downstairs on her own bed nearby her adoptive "sister," Angel.

Then in September we realized she was getting very deaf, and more and more sensitive to odd noises. She had developed a fear of thunder and fireworks a few years ago, but now she became afraid of acorns falling on the tin roof at our cabin in the Adirondacks, nail guns, hammering, and any other abrupt noises. She started shaking whenever one of these objectionable sounds occurred.

Then we went to Cape Cod for a week and she acted nervous in the car going up, panting and restless; then at the cottage, a new one for us that we hadn't stayed at before, she started acting nervous and pacing around every evening.

We had gotten a prescription for Xanax from the vet for her since we had started noticing this nervousness before we left, and that calmed her down but didn't cure the problem. She decided the bathroom was the only safe place to sleep, so we put her bed in there. Not very convenient when we got up in the middle of the night to use the facilities, but at least Diva was happy. We were afraid she was developing doggie dementia and that it was a sign of age and it would only get worse...

Then, the day after we got home, we finally realized what might be part of the problem - she had a urinary tract infection! She started asking to go out and urinate every half hour and we realized there was blood in her urine. We rushed over to our local emergency veterinarian clinic and had her checked out and the vet gave us antibiotics and painkillers for her. After only a day on the antibiotics and painkillers, her behavior became much more normal. After two weeks she seems back to her old self; but she still won't sleep on our bed.

We were up at the cabin this past week while she was still getting better, and we were still worrying about her, as well as DH's mom, who was back in the hospital with yet another bout of pneumonia. She had also developed a C. difficile intestinal infection from the antibiotics she was being given for the pneumonia, and was not doing well at all. Based on my experience with my own mother, this infection could very well be what swept her away.

One night while we were at the cabin, DH had a terrible nightmare. I woke to find him pawing my shoulder and making odd noises. I finally shook him awake and said, "What's wrong?" He said, "A rat. A huge rat."

The next day he remembered the dream: He had been dreaming there was this huge, snarling rat attacking Diva, and he was trying to beat it with some kind of a stick and get it away from her. He had been calling for our other dog Angel to come kill it but she was nowhere around in the dream. He said it was one of those dreams where you can't do anything -- you can't hit the rat, you can't move fast enough, nothing works.

I told him it must have been that he was fighting the Rat of Death and trying to keep it from Diva, and that Diva might be representative of his mother as well, since he was so worried about both of them.

The next day one of the doctors taking care of his mother in the hospital in New Jersey called to tell us that his mom had taken a turn for the worse and it was really time to let her go; he said it was unfair to keep having her go back to the hospital for treatment over and over, and make her suffer further (which of course we did agree with).

We left the cabin earlier than we'd planned and returned home, arriving late in the evening The next day we received a morning call from the doctor overseeing my mother-in-law's care to tell us she'd had to entubate her after she had stopped breathing earlier that morning, because DH's dad had not made a decision to put her on palliative care. She said Mom had been moved to intensive care.

We met at the hospital along with DH's dad, and told them we would like her taken off the respirator, expecting her to pass away an hour or so later.

As it turned out, after the respirator was removed, she stabilized and has been holding her own ever since. She is being given morphine and is no longer receiving any curative measures. But she continues to fight against the Rat of Death a little longer.

Thanks for sharing Mimi...so poignant and so real...I pray for your Mother in law to pass gently and for sweet Diva to have a few more enjoyable years with you all...the transitions of life are hard to bear but they are part of the life cycle...thoughts are with you..I know this is hard..

Thanks Sherry. It's been a long hard road, particularly because my father-in-law has been in such denial that Mom was going downhill. He said yesterday he really never thought she would die. At least now I think he is resigned to it. I just dread what will happen after she's gone and he has no more reason to live. It will probably be one of those cases where after one spouse dies the other follows quickly. Of course, he is nearly 90 himself. It's sad because he is in such good shape and if Mom hadn't gotten dementia she would've been too. They were very active.

I read your post with interest and sympathy. My dad (now 96) is in good health, but my step-mother (84) who he married after my mom had died in 1991 is failing. She has Parkinson's, so various types of muscle control, including swallowing are impaired. Couple that with the dementia that often accompanies Parkinson's, and you get the picture. About a year ago I went through a form with them that Pennsylvania law requires for nursing homes to have for residents. Included in the questions was one about artificial feeding--my own preference is NO artificial feeding, but the family doctor counseled a course of "trying it" and then ceasing, if it does no good.

We are not at that point yet, but I sense the day is coming.

KGMom, I hope you don't have to make this choice. It is a very hard decision. I am very much in favor of foregoing feeding tubes in terminal cases, but it is up to the loved ones to make the choice. Love and light to you.