A Cat's Eye View - Baxter has returned just in time for the election season! 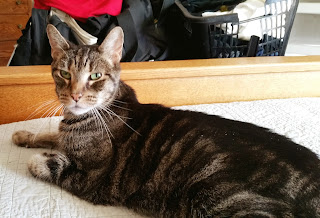 Well, here I am again. I expect Many of you have wondered where I have Been; I suppose a Few have also wondered about the Disappearance of my Female Human over the past Year or so. Of course, not as many as would have missed Me. That Goes without Saying.

On My part, I have had a Bad Year, health-wise. In Fact, I may have used up one of my Nine Lives this past Year. It all started Last Fall when I started Losing Weight. That Female Human who sticks needles into Me and pokes at Me in that Office we go to (my Humans call her a Veterinarian, whatever that is) suspected I had something wrong with an Organ I apparently have called a Thyroid. She decided my Humans would have to shove some little White thing down my throat at Periodic Intervals in order to Fix the Problem.

Well, Needless to Say, I tried my Best to trick them out of being able to do this. If I see one of them coming, I Hide under the Bed until all risk of having that Thing shoved down my Throat is over. If it’s at Night, I just wait till they go to Bed and turn out the Light and then I can come out. Sometimes they try to Trick Me into eating it in my Food but I am Too Smart for them.

Nonetheless, I eventually had enough of these things (I believe they call them Pills) shoved down my Throat that the Veterinarian thought I should be gaining back the Weight I had lost. But I wasn’t. She got worried there was Something Else Wrong. After Several Months they finally decided I needed something called an Ultrasound. I was Dropped Off ignominiously at 8 a.m. one day at the Veterinarian’s Office and left in a CAGE (the horror!) until the Procedure was done. As it turned Out, I have some kind of Thickening in my Guts somewhere that could either be Cancer or Inflammatory Bowel Disease. The Veterinarian and my Female Human agreed that at My Age it wasn’t worth doing a Biopsy to find out which it is; the Treatment would work on either, one more long-term than the Other. I think they called it Prednisilone.

So now – to my Horror – I have to have TWO of these Pill things shoved down my Throat twice a day. I had gotten Very Thin – down to 8-1/2 lbs. -- when I was once a Hearty 23 lbs.! My Humans said I looked like a walking Furry Cat Skeleton. Lo and Behold, after 6 weeks on these New Pills, I have gained back 4 lbs. and am looking much more like my Old Self! On top of That, I have enough Energy to jump up on the Bed again instead of using the Cat Steps my Humans had put there for my Use. How do you like my New Look?

Sure, I sometimes still Manage to avoid taking the Pills but I know underneath that they may be what is Doing Me Good. So I get enough of them to Do the Job. My Humans hope it is the IBD and not the Cancer. Seems to Me if it were the Latter, I wouldn’t be doing as Well as I am!

So, now that I am feeling Better, I thought it was About Time that I went back to Blogging, as one of my Fans suggested to my Female Human recently on Facebook.

And just in Time, too – the Presidential Election Season has Already Begun! Oh my, I can’t Believe the number of crazy Candidates there seem to be on the Republican Side! And the Leading Candidate so far is that Donald Trump person – what on Earth is going on when more Republicans think he would be a Good President than any of the others? I am only a Cat, but even I can see he has no Qualifications to be President.

Then there’s the Neurosurgeon, Ben Carson. Being a Neurosurgeon doesn’t mean you’re smart. It means you are a Good Mechanic. You can cut open someone’s Brain and make a lot of delicate changes that require Steady Hands and a Knowledge of what Nerves are located Where. That is something you Memorize. But when it comes to Knowing Things outside of Medicine, or even Thinking Right in general, there is no need for that in that career.  And obviously, this one lacks both of those types of Knowledge. I mean, he doesn’t believe in Evolution, for One Thing. How can you be a doctor and not believe in Evolution? Even I know that we Cats weren’t always in this form. We are related to Big Cats like Sabre Toothed Tigers! I am proud of my Tiger heritage! It is obvious we Cats of all sizes have Common Ancestors. How can it not be Obvious to these Evolution-Deniers? He actually said that the basic Tenets of Evolution are "fairy tales" and compared the Similarities between various Species to different models of General Motors cars!

Secondly, he obviously doesn't believe in the Constitution. To think that he would Say Outright that he would not "advocate" that a Muslim be "put in charge of this nation"! He later amended that to say “a Muslim who believes in Shariah Law.” Either one is Reprehensible given the Constitution says there should be “no religious test” to be President. But even if you go by his Amended Statement, what about Christians who are Fundamentalists and believe the nation should be governed by the Rules in the Christian Bible, which they believe unconditionally? Shouldn’t they also be Barred from the Presidency under his principle?

Then there’s Carly Fiorina, failed CEO of Hewlett-Packard. Another one with No Political Experience.  For what other Job would people with NO experience in the Job be the leading Candidates to get the Job? None, I daresay!

If they all Fail then Ted Cruz may have a chance to Win. I can’t even Go There…

The even halfway-reasonable Candidates like Kasich and Jeb Bush (I can’t Believe I am Saying that) haven’t Got a Chance! The Republican voters are Out of Control! It is Scary.

Of course, the Democrats have to have their own Drama too. Hillary Clinton was supposed to be the shoo-in for the Nomination – but of course, being a Clinton, there has to be a Scandal that comes out. Is it her Fault the Republicans jump all over her for everything they can dig up? Well, yes and no. She had a private email System at her home that she used for emails during her Tenure as Secretary of State. Maybe it wasn’t Technically Not Allowed at the Time she had it but it Didn’t Look Good. It seems as if the Clintons are not very good at avoiding things that Don’t Look Good. Sure, it may all depend on what the definition of “is” is, but in the End, if you are Smart, you don’t do things that Don’t Look Good at all, and then you don’t have these Problems.

So Bernie Sanders saw a Weakness and realized he might have a Chance! Bernie is probably the Least Likely to Succeed Candidate the Democrats could come up with in the current Climate of a Country constantly edging to the Right… he’s not even a Democrat, he describes himself as a “Democratic Socialist.” And you know how the Right loves to call anyone to the Left of Barry Goldwater a “Socialist” as a Pejorative Term. This guy actually calls HIMSELF a Socialist. That can’t go well.

That said, he embodies the Beliefs of a Whole Bunch of my Female Human’s Facebook friends, and, in all honesty, hers as well. She took one of those Tests where you answer Questions about various issues and then it tells you which Politician you most agree with. What did she get? Yep, 98% Bernie Sanders. And apparently a lot of other People agree with Bernie too. He is going up in the polls vs. Hillary, which will present a Quandary for Many practical Democrats. Do you vote for who you believe in, or who you believe will win in 2016?

My Humans have me up at that place they call The Cabin in the Mountains somewhere this Week and we can’t get CNN so I wasn’t able to watch the Democratic Debate the other Night. However, I hear Hillary acquitted herself Nicely and it went well for her.

It’s Too Soon to Tell how this will all Play Out, because we don’t know which Crazy Republican will be running in 2016! It all hinges on that.

So Stay Tuned. It should be an interesting Year! I hope my Health will Hold Out and I will be able to See What Happens! In the meantime, I can only Hiss at the craziness that is the United States election process…
Posted by Mauigirl at 10/15/2015 02:06:00 PM

you have a better chance at being president...

Welcome back, Baxter. A couple of my cats take those little pill things, so I'm going to show this to them. You're so handsome with your new figure.

Glad you're feeling better Baxter! Nice reporting on the current clowns in the race. It should be interesting!

Baxter you gots more smarts in your little toe than most humans I know...Keep up the good work and hope you regain your lovely chubby self...it looks good on you...take the pills!

thank you for the article given to us. very useful and an inspiration for our site DEWA JUDI QQ

Dewajudi88 DEWAQQ DEWAJUDI We are waiting for your article update on another occasion we will visit again.