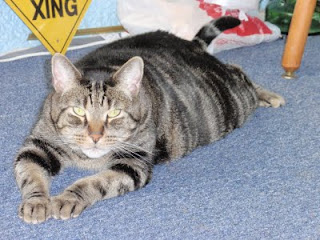 Baxter here. It's been awhile, but don't think I have Forgotten my Fans. I have just been Waiting for this Election business to be Over. It was all Too Much for Me.

I am just Glad that it turned out the Way it did and that we didn't have another Big Mess like back in 2000, as some were worried we would. Of course, I knew a Cool Cat like President Obama would know the right way to get back in the White House for four more years!

He sure didn't have much of a Second Honeymoon, though, did he?

Boom, right after the Election came the News that General Petraeus, the Director of the CIA, had been Fooling Around with his Biographer, Paula Broadwell - and then came all kinds of other Stories about these hot Twin Sisters, Jill Kelley and Natalie Khawam, who were hanging around all the Generals.

Amusingly to Me, these stories always refer to the Twins as "Socialites,"  a rather Quaint Term. Reminds My Humans of a Tom Waits song called Invitation to the Blues.  "He probably left her for a socialite, didn't love her 'cept at night, and then he's drunk and didn't even tell her that he cared..."
But I digress... sorry...

Apparently the former head of the CIA is spending his Days "grovelling" to his wife of 38 years, Holly, according to an Article in the UK's Daily Mail. My Female Human doesn't blame his Wife for being Furious, which is how her Mood is described by Those in the Know. 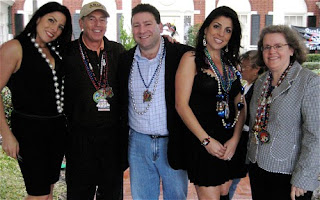 Even though it was Broadwell that had the Affair with the General, the Involvement of the Twin Socialites also seemed Rather Suspicious... something my Female Human felt was particularly Obvious in this Picture which has been Published far and wide, of the two Women, Petraeus (second from left) and Holly (far right) along with Jill's husband, in the center.

Two of these things are Not Like the Others, wouldn't you say?

In Fact, it has all Become so Convoluted and Involved so Many People in the Cast of Characters that the Borowitz Report posted an Article saying the CIA has come out with a Pamphlet to help you know whether YOU may be part of the Petraeus Scandal without even knowing it!

It is also being Reported that Paula Broadwell, who is married with two Children, is "devastated" by the Harm caused by the Fling between her and the General.

Ah, Humans... what is that Old Saying? "What a tangled Web we Weave, when First we Practice to Deceive."

Just goes to Show that perhaps Male Humans should be Neutered, just like Tomcats are, so they won't be Getting Into Trouble when they are past their Prime and vulnerable to Younger Women's wiles. 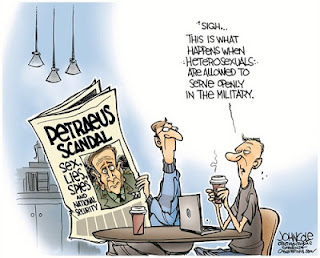 Or, per the Cartoon that Some have been Posting over on Facebook, maybe this is what Happens when you Allow Heterosexuals to Serve Openly in the Military?

At Any Rate, this Scandal is finally moving Off the front pages since it's been a Couple of Weeks and we're Off to the Races again with the Fiscal Cliff looming.

My Female Human says if she hears the words "Fiscal Cliff" one more time, she Won't Be Responsible For Her Actions.

President Obama Won the Election. I Hope he will use his "Political Capital" as They call it, to Stand Firm and not let the Republicans walk all Over Him during negotations. So Far So Good, as far as I can tell. For all the Latest News about the Fiscal Cliff, here's a Good Article. A few Choice Quotes to follow. The first, from GOP House Majority Leader Boehner:

This was countered by a Response from Democratic Senate Majority Leader Harry Reid:


"Mr. Reid said it was incumbent on House Speaker John Boehner (R., Ohio) to put forward a realistic offer in response to Democrats’ plan to allow tax rates on the wealthiest Americans to increase at the end of the year. Mr. Reid said that Mr. Geithner has not made a new offer to Republicans as both sides try to broker a tax and spending deal before the end of the year. 'The president’s made the offer–there’s no offer to be made,' Mr. Reid told a handful of reporters as he walked into his offices. 'There’s no offer to be made.'"

Ah, Humans. They continue to Spar like a bunch of Tomcats Yowling in a Circle, hoping One will finally get the Upper Hand and get a Good Grip on the back of their Opponent's Neck.

The Good News I see is that at least President Obama apparently hasn't already Given Away the Farm up Front, as he was wont to do in the Beginning of his first Term. There is No Sense in him Offering ANY cuts in Medicare, Social Security or Medicaid. Let the Republicans make that Suggestion. Otherwise the Republicans will take Whatever the President Offers in Cuts and then want MORE. Plus this way, it is Obvious that it would be the Republicans who want to Cut these Programs that are Very Popular with the people!

In Other Good News, Senator Dick Durbin said that Social Security should NOT be part of the Fiscal Cliff talks as it does not contribute to the Deficit.

Let's Hope that the fact that some Republicans are finally Rejecting their Pledge to Grover Norquist to Never Raise Taxes may Actually lead to Progress in the Talks. But I'm not Holding My Breath. So far I don't see a Lot of Compromising going on on the GOP side. It may Take Awhile for the Fact they Lost to really Sink In. If it ever does.

With that, I will Bid you Farewell for Now. I think we will All need a Lot of Catnip to get through the End of the Year. Hopefully January 1 won't Find us at the Bottom of the Fiscal Cliff!
Posted by Mauigirl at 11/29/2012 07:06:00 PM

Good to hear from old Baxter. He seems to have his eye on the target when he speaks. Much wisdom from him. Just wish the humans could have it as well together as he does.

thanks for stopping by..Barter you should meet Dexter..but then for the safety of others..maybe not.

And Baxter's Walnut-Size Wisdom is more than most of our media has managed to shower us with. Thanks, Baxter!