Farewell to Little Cat -- And, Hello to a New Dog 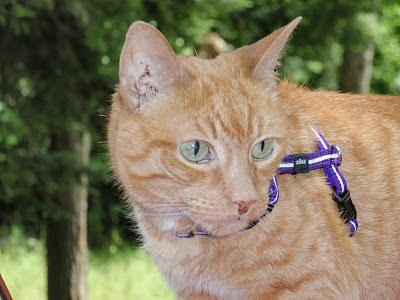 Sorry for not being around for awhile. I have some sad news - Little Cat (Zoe) started going downhill over the past few weeks, and about four days ago she lost interest in her food. So we took her to the vet on Thursday and they gave her IV fluids and nourishment, but it didn't help this time. She was just fading away. So we took her home and let her be in her own little bed. She spent a quiet day yesterday and slipped away a little after 7:30 p.m. last night. I'm glad she went so peacefully. She looked as if she was just asleep.

The vet had her down as 15 years old, but we've long thought she was older than that. My mother had gotten her at a shelter so her real age wasn't actually known at the time she adopted her. We knew when we got her after my mom died that she wouldn't be with us for that long. I'm just glad she had so many good times up at the cabin with us and that her last months were so pleasant.

In the meantime, we have decided to keep Angel, the pit bull who showed up at our house three weeks ago on a freezing cold night. She was probably used for breeding, as she had obviously recently had puppies. She was also emaciated, very smelly, and had very long toenails, as if she was never walked. After she had a bath we took her to the vet and she got her shots. She's completely housebroken, and sweet as can be. Her only flaw is she goes nuts when she sees cats and small dogs. But we hope training will help. Angel is gaining weight every week and is looking really good now.

Unfortunately, we also realized that she has an itchy skin condition which the vet and I think must be mange. The vet didn't find any mites when she did a skin scraping, but sometimes they don't show up. So we're treating her for mange. Luckily it isn't necessary to do horrible things like dip the dog in insecticide as they did in the old days. The vet gave her a shot of Ivermectin, which must be repeated in two weeks, and we have to shampoo her with a medicated shampoo once a week. It's always something! Sometimes I feel as if I live at the vet's office!

Luckily she and Diva get along well, amazingly enough. I thought Diva wouldn't put up with another dog, especially a female, but she is being surprisingly tolerant. We can even have them in the same room and they get along well. So we are keeping her. She is the most affectionate dog; all she wants to do is sit next to you and cuddle. She walks well on the leash, is great in the car, and just lives to please you. How anyone could have mistreated her like that is beyond me.

Here are her latest pictures. We gave her a toy and she was beside herself. She'd apparently never had one before. 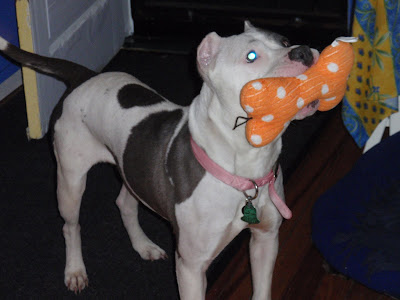 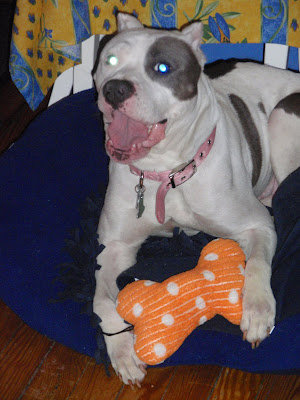 This one is actually from about a week ago but I love the way she cocks her head (which is why it is a little blurry as we captured her doing it!). 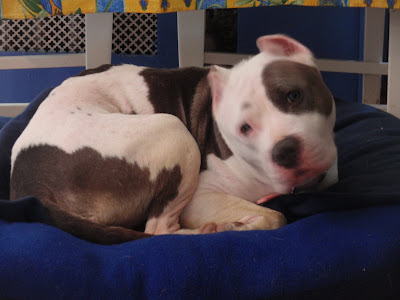 So, that's the news from our household. I'll be back again soon and may actually write something of substance now that things are calming down around here. Hope to be visiting your blogs more too!
Posted by Mauigirl at 3/05/2011 07:28:00 PM

New Girl is a PRETTY baby!@ Has a sweet face and an eager smile. Glad you decided to keep her...

so sorry about little cat, but it sounds like she had a wonderful life, and she went the way we all hope we will--at home and in peace.

best of luck with the new addition. if she keeps itching, ask the vet to do allergy tests.

That's a really pretty dog. I'm glad you're taking such good care of her.

For all the love animals give us, they come into our lives and they leave.
Thank goodness they are in our lives--but, oh, their leaving is so hard.

The Kid's dog had what appeared to be a bad case of dandruff. When I took him to the Vet. he said it was a skin infection. After several weeks on meds, it cleared up and hasn't come back.

Aw, bummerz. I had to 'dog sit' with the old family dog at the ex-s yesterday... Snickers is a fourteen year old bishon with arthritic hips and can't travel much. Sad deal.

awww...so sorry about Zoe. Our oldest dog is working on 14, the girl is working on 11. Our oldest cat is probably 10, the youngest 2 are around 8...So far all seem reasonably healthy what with a bit of arthritis and generally slowing down. But we know that future is not long now, expecially for a dogs who are both large--the ones with the shortest lives generally. Glad you have a new pup to offset the sadness a bit. Blessings Maui.

AWW. Bless your hearts for your kindness!

Awww. I'm really sorry about your cat Mimi. But Angel looks like she's an awesome dog. Good luck with her! :)

She looks so much better. Sorry to hear about your cat. It's never easy.

The kitty had a good life and that's the best any of us can hope for.

The new dog must think she's in heaven after what she's been through.

Sorry for your loss (Zoe). We had to have one of our cats put to sleep last summer. It was agonizing. It still is.

Congrats on the new addition to the family.

Angel reminds me of the RCA Victor dog, (with the tipped head) or the dog from Spanky & our gang (but the dark spot is on the opposite eye!).

She looks like such a sweetheart & she landed at your place-- a true dog lover who is already giving her excellent care & a nice home- to be pampered forever. So cute with her toy.

Glad the 2 dogs are now getting along- it is a big adjustment for a Diva to have to share the place.

Sorry Little Cat passed away, but @ peace & @ home, mean less trauma. It was her time.

Baxter is probably feeling outnumbered, but is already a pro at dealing with *those dogs*.

He might even look forward to your outings to the cabin so he can be king of the place for a while!

Who knew in your retirement, you would be running a small scale animal rescue?
But you are doing what you love, so that is a sweet situation.

Sorry your fine-looking cat passed away, Mauigirl. But good for you, for giving the dog a good home. Your kindness will be returned many times over, I'm sure.

Thanks so much, everyone, for your sympathies about Little Cat, Zoe. She was a tiny cat with a big personality and she will be missed.

I am glad Angel came into our lives to keep us from having much time to dwell on sadness. Now that we have two dogs, they are very time-consuming - but worth it! Baxter seems to have adjusted relatively well to just staying upstairs. (I spend a lot of time up there so he doesn't lack for companionship). One of these days we'll have to try to de-sensitize Angel to cats, but in the meantime I'm just grateful she and Diva are doing OK!

Sorry late to comment. I've been crazy busy. I happen to love animals more than I do people by far. I'm sorry about your cat. Truly! The new dog I love already and don't even know the beast.lol
The last dog we had, was an abused dog from the shelter. So old bitch used to beat the shit out of the dog to where he would just shake. It took a lot of time and effort to bring him around. Hell I even had to teach him to bark. No bullshit!
Well he passed from cancer a few years back and I lost my best friend. So cherish the time as I know you will.

That is so nice of you to take that little dog in! Pit bulls are sweet! They can be so goofy! But when treated properly, they are affectionate and fun!

I'm sorry about your cat. It's so sad to lose a pet like that. But he had a good life!