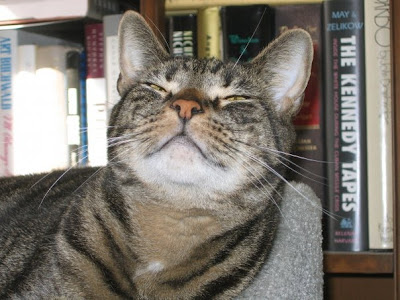 Baxter here. I am finally ready to Blog again after a Long Absence. As you Know, my Humans have procured a New Dog, and I am Not Happy About It.

Because the New Dog, Angel (Ceiling Cat knows why they picked THAT Name for her), is Bad With Cats, I, Baxter, have to Suffer. I am confined to the Second Floor so the New Dog doesn't chase me down and possibly Do Damage to Me. Of course, I have my Own Room, complete with All My Toys and my Scratching Post Perch thing, my Box and everything I need. And I can go into the other Rooms on that Floor, including the Bedroom where my Humans and That Dog, the one they call Diva, sleep. So I do get Some Attention.

But I'd like to continue to come Downstairs and sit with the Humans when That Dog is sleeping, as I did Before. But until the New Dog gets used to Me, I guess I'll have to put up with the Situation. She has come to my gate when I was in my Room and looked at Me. Once I gave a Mighty Hiss and Growl and she seemed Intimidated. But the next time she just Barked at Me.

So. Here I am, finally ready to Blog about Current Events. But the Current Events have been So Horrendous in the past Few Weeks that I don't know where to Begin. I'm going to Skip the most Tragic events such as the Terrible Events in Japan. So, that leaves Me with...Libya.

OK, so like the other Countries where the people are Revolting (well, the PEOPLE aren't revolting, they are staging a Revolt), Libya has its own Revolt going too. Unfortunately the Human, if You can call him that, Qaddafhi or Gadhafi or whatever Crazy Spelling you want to Use for him, threatened to Kill all the people who are Protesting. So our Country, in its Infinite Wisdom, has decided to Get Involved. We didn't Get Involved with any of the Other Revolts, but who am I, a Mere Cat, to Question the Government?

From what I understand, Other Countries asked us to Get Involved. And it is a Coalition Force, acting on a UN Resolution. Sounds Vaguely Familiar to me. What was that war called? Korea? Oh, wait, it was a "Police Action." Wonder what they will call This after the Fact? Jon Stewart had a few ideas:

Personally, as a Cat, I find it Foolish to Get Involved in what is basically a Civil War. If I am going along, Minding my Own Business, and see a big Catfight happening on the Other Side of the Street, you can bet I am not going to Get Involved. I certainly don't want to get in the Middle of it; it's a Good Way to Lose an Ear, or worse!

At any rate, I hope this Ends Soon and we don't have another Big Mess on our hands. In the meantime, could the Pundits and Congresspeople ever think about the Economy once in awhile instead of Arguing over Every Last Thing that President Obama has ever supported or done? As My Favorite Human, Jon Stewart, noted, in the Eyes of the GOP, President Obama can't do Anything Right.

By the Way, my Female Human and her Friends were in the Live Audience at the show just Above. It was their Second Time there, and they are going to see Stephen Colbert next month. As a Cat, I would not be Allowed In, which makes me feel Discriminated Against. They also don't let Kids Under 18 in. I guess it's because All Those Words that get beeped on the TV show are said Quite Clearly in the studio. But Come On, what Teenager doesn't Already Know those Words?

Well, that's About It from MY end Today. Oh, before I go, How do you Like the New Format? My Female Human suggested that I Make Some Changes in honor of Spring, to perhaps encourage it to Show Up. So far, she tells Me, all these Sunny Days I observe from my Window, are still Very Cold and Windy. Let's hope that Changes Soon.

In the Meantime, keep hitting the Catnip and hope we are not Now Involved in Yet Another Costly War in an Unfriendly Country.
Posted by Mauigirl at 3/30/2011 01:27:00 PM

Sounds like Baxter is having a rough time. Tough to integrate a dog into an existing cat house. And Baxter seems to have found the achilles heel in the Libya issue...we are doing nothing in Bahrain or Syria...hard to tell how this all will come out. Happy spring!

Baxter fools us all in his photo, he always looks so content! But he should rest easy; sure, these are the Dog days, but trust the CIA to do what's right. Thank you, thank you, I'm here all week, enjoy the veal.

Sherry, I was just happy Diva gets along w/Angel. Hopefully with time Angel will get used to Baxter too. But yes - the inconsistency in our policy is the issue in Libya!

Randal, Baxter is actually quite content, he is a real purr-y cat and seems to not mind being upstairs all that much...hopefully it's temporary! Yes, the CIA always does what is right - NOT!

Baxter, most cats I know get resident canines whipped into shape in about three snarling confrontations. After those, the dogs seem to understand there are boundaries, and painful penalties for crossing those boundaries.

In any case, you look mighty content in that photo, so I think your situation can't be all that bad.

Re: Libya. Intervention is called for, but the Arab League countries, especially the United Arab Emirates and Saudi Arabia, should step up and do the intervening. The U.S. should lean hard on them to do it.

It's past time for Uncle Same to be relieved of duty as the world's policeman of first and last resort.

Baxter, you're the best. My own cats are very impressed with your literary prowess.

Baxter, I'm sure you'll have the New Dog cowed in short order.

As for Libya, ick. Can we bury our government's foreign policy in someone's litter box? It's giving me headspins.

Wonderful beach with lots of greenery. I had rarely seen this kind of combination.
I like this and if get a chance want to be there once.
eye lift

Well Baxter you are literally above the dogs which is most befitting. You rule the upper roost & are in the inner sanctum sleeping zone w the pet humans. Not too shabby.

I'm jealous the pet human got to go to see the Daily show live. How fun & funny is that?
The whole Libya scene is sooo wrong in sooo many ways. It is almost a wretched curse to hear those words "this war will be quick & easy"...
as we head in to the 9th year in Iraq & the 10th year in Afghanistan & spent over a trillion to have those wars (still in progress).....
I could say I'm relieved we have a Nobel peace prize winning president in charge, but that would sound sarcastic & bitter.
Nudd said-- I have no appetite for a turd sandwich.
As an aside this Mercury in retrograde situation is wreaking havoc in my life.
Hurry up April 23.

If the Sudan -- where more than 1 million poor souls have been killed, had the same amount of oil Libya is sitting on, rest assured that President Pootie Tang would have the US military lobbing missiles into the Darfur region.

But alas, Libya is the largest producer of oil in Africa and Sudan is sixth or seventh, so the horror of Darfur doesn't matter much to Dear Leader.

Obama is so full of shit.

Well Baxter, it is nice to have you back. I hope the new dog learns to give you the respect you so richly deserve. I am too far away to see Jon Stewart's show, so I feel your pain.

There must be something else that gets our country involved militarily in Libya but it sure isn't human rights.

I came by earlier but didn't have time to comment so sorry about that.

Sorry for my bad english. Thank you so much for your good post. Your post helped me in my college assignment, If you can provide me more details please email me.

This is a great posting I have read. I like your article. Buy now