This has been another one of those weeks. Lots of work, no time or energy to blog afterwards. So I am very happy that Bob tagged me for this meme!

At least I don't have to choose a subject to blog about when there are so many subjects to choose from that other bloggers are already doing a great job on - for instance, the racist, tasteless cartoon in the New York Post - or the latest news such as the continually tanking economy, or President Obama's trip to Canada.

No, instead I can just do this nice, restful meme and not have to think too hard since I have been at work all day and just have no brains left to think with.

So, without further ado, here is the meme:

Grab the nearest book - no matter what it is. Textbook, novel, pop-up book, building code study guide, whatever.

Turn to page 25.
Read the 10th word on that page, or the following if that one is blank.
Type that word into Google Image search.
Post the third image.
Tag 4 people and tell them.
Link back to this post. I'm not sure if that means Bob's post (herein linked) or mine? Perhaps Bob can elucidate.

Since I am sitting in a room with three huge floor-to-ceiling bookcases filled with books, I will need to close my eyes and just point to one on the shelf, as there are a lot of books very near me.

I managed to pick out the Images of America - Bloomfield book which was compiled and written by two people in my town, Fred Branch and Jean Kuras, who are very involved in the local historical society, as well as Mark Sceurman, one of the creators of Weird New Jersey (also a Bloomfield resident).

I was hoping I would get a word that had something to do with my town of Bloomfield, but instead I got the word "stroll." So, following the directions above, I searched Google Images and picked the third one - and here it is: 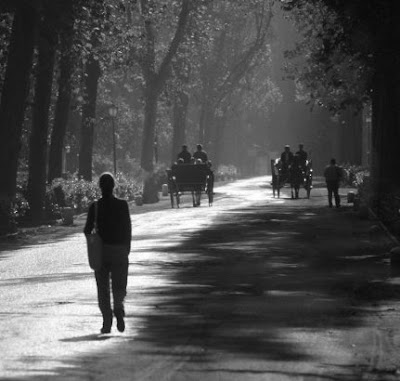 It is called "Early Morning Stroll," by Geoffrey Lauder. It was one of the entries in the 2005 Cambridge Camera Club Competition for the POTTERS BAR & DISTRICT PHOTOGRAPHIC SOCIETY. You can find more striking photographs at their website.

I always like black-and-white photographs the best. They are dramatic, they hold up well and stand the test of time.

The same goes for black-and-white movies. We've been watching a series of old movies recently because DH and I were thinking of movie themes to have if we ever ran a movie revival theater. (We have a lot of fantasies like this, which will never happen in real life).

We were thinking it would be interesting to show a whole week of "apocalyptic" movies and we thought of Seven Days in May, The Bedford Incident, Dr. Strangelove, On the Beach, Fail Safe and Testament. Yes, that's only six. There are plenty of other ones out there for the seventh. It's amazing how many movies like this were made in the past several decades, due to the ever-present dread brought on by the Cold War.

So, being the impulsive (should I say compulsive?) shopper that I am, I got onto Amazon and ordered all of them except On the Beach, which we already own, and Testament, which we have on VHS and I found was discontinued in DVD and only available for $50 (or more) at the time I was looking.

So, we started our own little apocalyptic movie showing and have watched Dr. Strangelove, Seven Days in May and Fail Safe, so far. All three were in black and white, and I feel they were stronger and more compelling because of it.

If you haven't seen these movies - or if you have, but haven't watched them in a long time - they are definitely worth seeing again with the perspective we have today. Not as much has changed as we'd like to think. The generals all still want to try out their weapons in real wars, there is always a sensible person who wants to prevent war, but is opposed by those who want the war; there is a lack of trust between nations, and Murphy's law applies as much to wars as it does to anything else: If anything can go wrong, it will; and the corrollary, if you think nothing can go wrong, you're wrong.

As for Testament, I haven't seen it since the mid-1980s when I watched it for the second time. It stars Jane Alexander and was very well done. Around the same time, a made-for-TV movie called The Day After came out, but it had a much more gung-ho, "we're America and will survive no matter what" kind of ending. Not so with Testament. It is the most devastingly realistic and depressing depiction of what would happen after a nuclear war that I have ever seen. I think I was depressed for a week after I saw it the first time, and the second time I realized I probably couldn't take watching it again after that. So be forewarned if you decide to watch it. It does not have a happy ending, to say the least.

I seem to have digressed from the meme. I am now supposed to tag four people. Let's see, how about:

That was wonderful. I love how people are taking something I came up with out of desperation to have something to post, and expanding on it beautifully.

And yes, I did mean for that one link to be back to me, so's I can see where all this thing ends up. But you linked to me anyway, so it's all good.

Thank you for throwing me some rope there! And thank you too Bob :)

Great pic. "Testament" was a great movie. It scared the living hell out of me when I first saw it. Growing up with a bomb shelter didn't help either.

The last time I got this meme the nearest book was about cryptography. Nobody was very impressed. ;-)

I love the apocalypse! So much fun. Good stuff!

How about some reality-based fiction for the number seven spot in your Apocalyptic Film Week. If you haven’t seen ‘The Atomic Café’ yet, I recommend it.

It is a 1982 documentary compiled by Kevin Rafferty from US propaganda, news, and informational films from the 40s and 50s that were designed to reassure citizens that the atomic bomb was not a threat to their safety. Quaint, hilarious, scary and worrying in turn, but always informative about a bygone, naive era.

Warning: This is not a film to watch if you wish to retain that warm cozy notion that your government is wisely and steadfastly protecting and informing you of every possible danger.

Bob, good, then I did the right thing!

Liberality, glad to be of service! ;-)

TheMom, I know, it was a terrifying and deeply moving film. I remember when I was about 14 I saw Fail Safe the first time and had nightmares for weeks. I remember even before that I used to worry, back when I was 6 or 7. My neighbor had a bomb shelter and I was worried because we didn't have one!

Randal, I have a morbid fascination with it my self.

Wee Mousie, thanks so much for the recommendation! You know I'll be on Amazon looking for it immediately!

What a great picture you found! I love it. I love how creative one can be with this meme. Bob did a good blog-thing.