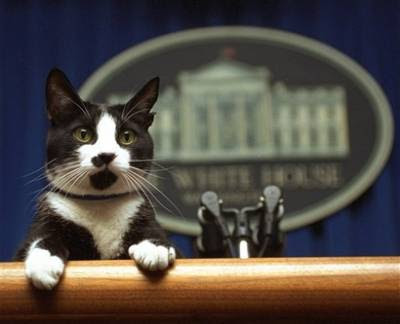 (Photograph from the AP, from article linked below)

I just saw the sad news that former Clinton White House cat, Socks, died today. As everyone may already know, Socks did not go with the Clintons when they left Washington, but was adopted by Betty Currie, Bill Clinton's secretary. According to the report,

Socks lived to be a ripe old age - estimated at about 18 - and had been diagnosed with cancer late in 2008. He apparently lived a wonderful life with Betty Currie, who clearly loved him and took great care of him. He definitely got a better deal than the Clinton dog, Buddy, who went with the Clintons but, sadly, was struck by a car a year later.

That is a very long life for a cat as we know. I blogged about little Socks, when it was discovered she had cancer. Being a cat lover also, I feel sad.

Not a good weekend for felines...:(

I can't imagine leaving behind a family pet.

I mean, we're moving back to California and I can't see giving our dog to a friend or a neighbor.

Ginger is a part of our family. Oh well, whatever.

Eighteen ain't too shabby. I'm with christopher, there's no way we could leave our cats behind were we to move.

Annette and TheMom,
Yes, he did live a good long life. We had a cat who lived to be almost 20 but when she hit 19 she started to have a lot of problems. But it's always sad.

Deb, I feel bad about Socks and about Chester too. It's very hard to lose them.

Christopher and Randal, I totally agree - our pets are part of our family and a lifelong commitment. I would never leave behind a pet. I remember when I worked at the Humane Society people would turn in their pets because they were moving to a place that didn't allow them. WTF? So you don't move there!

In Socks' case, though, he really did get a good deal - a lot more attention than he probably ever got from the Clintons.

Socks is the only family cat I can recall seeing in the White House. I remember thinking how neat it was to finally see a presidential cat! I think the official rumor was he didn't get along with the Clinton dog & that's why they found him a new home? But he obviously did not make it 18 without much love. None of my cats has made it beyond 16 even with unlimited love!

it so disturbs me when people leave pets behind - grrrr

That is a long-lived cat. RIP Socks.

I hadn't heard of his passing, so happy to know what happened to him!

According to About.com, Bootsie lived to the ripe old age of 88. We should all be so fortunate.