It's very cold out today. Ordinarily I wouldn't know that since I rarely venture out in the morning in the winter. But today was the day that our neighborhood association (of which there are about 100 members who pay dues, but only about nine of us who actually do things) puts up decorations along the fence in our local park.

These decorations are big wooden boards which are painted with holiday pictures, that have to be attached to the fences with plastic ties. The pictures (houses with snow, mittens, snowflakes and other non-religious but cheerful images) were designed by one of our members, who is an artist, years ago. The pictures were drawn on the boards and then local neighborhood children painted them with waterproof paint. We've been putting them up for the past nine years or so and everyone enjoys them. 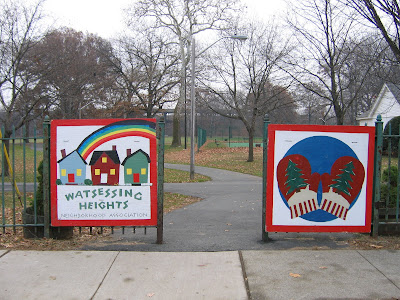 Luckily for the nine people who do things in this group, the county park workers store the boards in one of their buildings all year and they bring them out in their truck and help us distribute the boards along the fence at even intervals. And even better, the high school coach whose mom lives in our neighborhood brings his entire football team to help put them up. Without them it would take us all day.

So this morning, bright and early at 9:30, I arrived at the park armed with a Box o' Joe and four dozen donuts from Dunkin Donuts. A crowd of teenagers (mostly boys) had already gathered at the meeting place. They eagerly put up my folding table and the donuts and coffee were placed on the table, which was immediately swarmed by cold hungry kids. When they were done it was as if a plague of locusts had visited - only a few crumbs left.

After they had been fortified with sugar, they were ready to work, and I didn't need to do much after that. A few more people from the neighborhood showed up but the teenagers did 99% of the work. Most of them did the job last year so they knew the drill, and they showed the new recruits what to do. DH arrived and took some pictures for our neighborhood newsletter and by 11:15 it was all over and I could return home and warm up!

Moving on...I heard that "our" area of the Adirondacks got an ice storm yesterday. Apparently the whole eastern portion of the country, including Vermont, New Hampshire and Massachusetts, got hit with it and lots of people have lost power.

I was glad to hear that FranIam and Mr. HeIs did not lose power, but they did get hit with the ice and unfortunately have lost trees in their neighborhood.

Assuming our cabin was hit with ice as well, I doubt any further roofing or other work will be done on it for quite some time! In fact, work may be done for the season. I expect there will be nothing but snow up there from now until April. However, we will probably still go up and check on it over New Year's weekend so we can try out the Jeep. Think the ice will have gone away by then? (No, neither do I). At least we had no power to lose!

On another subject, check out this link which will bring you to a site called "Igetblues.com" which has posted two videos that you have to watch. I can't embed them so you must go there. They show what life would be like without the blues (picture the Rolling Stones and the polka...enough said).

On a more serious note, as you already know, the Senate did not pass the bailout bill for the auto industry, which is not good for us since we just bought a Chrysler product and it has a lifetime warranty. Lifetime of the car or lifetime of the company? If the latter, it may be a very short warranty.

However, Bush is apparently going to give them some of the $700 billion already allotted by Congress for the Wall Street bailout. I guess Bush doesn't want to be known as the president who let the American automobile industry go down the tubes.

While I don't have sympathy for the CEOs of these companies, who have not made much effort to keep their industry in pace with the times, something many people forget is that their workers and retirees are costing more because of healthcare insurance so there is less money for innovation, quality or keeping the costs of the cars down vs. competition. If our country had universal healthcare as many foreign carmakers' countries do, this would be taken out of the equation and the disparity in wages between Detroit and foreign companies would not be that large.

The GOP is trying to blame things on the UAW, but there are many factors at play here. Besides, the GOP was perfectly happy to throw $700 billion at Wall Street with basically no strings attached, but can't manage to give the car companies $14 billion without adding so many conditions that the talks broke down? Come on, it's class warfare pure and simple. They just want to blame the union.

If anyone thinks it's OK to let the American car industry go under, this Op Ed article in the NY Times reminds us what happens when car companies go out of business.

"Misery has rarely been mentioned as a reason to pass an auto industry bailout. But walk through the Packard plant on a December day and you will know that once a car company disappears, in southeast Michigan at least, nothing comes along to take its place."

Detroit has been trying to redevelop this factory since it closed in 1957. You can go here to see a whole group of pictures of the abandoned building, which was once a marvel of architecture in its day.

Let's hope whatever Washington does, we can save the American auto industry and prevent a further meltdown of our remaining industrial strength.
Posted by Mauigirl at 12/13/2008 12:22:00 PM

The health care insurance point is a really good one.

Ah yes - many trees down and many will be without power until Tuesday at the earliest. It will be 15 tonight.

Believe it or not, where your place is got more of a snow storm, not so much with the ice. I drove up to exit 15 today, which is the northern part of Saratoga Springs and Wilton today and it was like a different world than we have in Albany.

Cthulhu bless the blues. I, and I'd imagine most folks with working brains, are with you. Hell with the CEOs, but those are American workers. So much money wasted on Oedipal bullshit, but nothing for goddamn workers. I hate these fuckers.

All you folks getting smacked by winter stay safe!

You are spot-on regarding the auto industry situation. Healthcare must be the lynchpin for any real progress. It is now vital to our economic survival.

And yes, we need to call them on their class warfare.

GM announced it is doing a month long plant shutdown, maybe longer for 30% of it;s mfg plants.
Maybe the gvmnt will see how much that costs in unemployment.

Meanwhile my husband just go laid off @ his job temporarily for a month.

I was at my nephew's birthday party last Saturday and even my normally wing-nutty brother agreed that the Southern Senators' actions are union-busting at it's worst. He said that these guys are scared to death of having unionized auto plants in their state. I was floored.

But I'm not amazed at the teen turnout for your association's decorating event. I see lots of teens turning out for these types of events lately, and, of course, the free coffee and doughnuts don't hurt.

These kids have been great every year - without them the decorations would just not get done as us old folks are getting burned out!

I think the other thing with these southern Senators is of course, some of them have foreign automakers in their states, so their constituency is perfectly happy to let Detroit go down the tubes.

by now, you know what bush did this weekend instead of working on making an auto industry loan part of the TARP (thus avoiding congress). wily bastard just doesn't care.

I agree, we need to save those jobs! and we need national healthcare. why not combine the two goals?

your park decorations are wonderful, what a nice thing for kids to get involved in. OK, I will go watch the vids now.