While we were away I caught up on reading my newspapers, which had been piling up last week. In the Thursday New York Times, Roger Cohen had an Op-Ed piece about the new French finance minister, Christine Lagarde, who is a proponent of moving France to a more "American" way of life.

Nicknamed "The American" by her countrymen, Ms. Lagarde is making an effort to get the French to, basically, work more: “We are trying to change the psyche of the French people in relation to work.”

Her attitude was nurtured by 20+ years in America:

"In an interview, Lagarde says that more than two decades at a U.S. corporation taught her: 'The more hours you worked, the more hours you billed, the more profit you could generate for yourself and your firm. That was the mantra.'" (Ms. Lagarde was the first chairwoman of the Chicago- based law firm Baker & McKenzie).

Ms. Lagarde feels the passing of the legislation for the 35-hour work week in France had "disastrous" effects in her home country. She said the result was that “People did not really talk about their work. They talked about their long weekends.”

(Quelle horreur! Heaven forbid that people should prefer to talk about their real lives instead of work! How dare they? This must stop!)

Ms. Lagarde wants to lower the unemployment rate from 8% to 5%, and raise the percentage of the population that is gainfully employed from 63% to 70%, by the year 2012. How does she plan to accomplish this?

"Tax cuts, the termination of unemployment benefits for those refusing two valid job offers, later retirement, incentives for those working more than 35 hours, a slashing of the bureaucracy associated with job-seeking and improved professional training are among measures enacted or envisaged. Legislation to reverse the 35-hour week is possible."

Cohen supports Lagarde's goals: "Without a dynamic France, Europe cannot be revitalized, and a Europe in a Gallic funk is bad for everyone. If an overbearing America has been a problem, an underperforming Europe has been its complement."

I disagree with the idea that every country and every culture has to center its efforts on "performance." Why is the American model always held up as the "right" way to live? Why do so many people believe in hard work as some kind of moral imperative? That the correct way to conduct one's life is to work long hours, make more money, provide more profit for the corporations, take as few vacations as possible and live in constant stress?

At one time, there were good reasons to work hard. The purpose of work was to provide food and shelter for one's family. Now it is to hoard money, more money than anyone needs to live. Work, and its goal, profit, have been elevated to a type of religion here in the United States.

And now this sickness is spreading to countries that used to be more sensible about work, who believed life was to be enjoyed and to be lived to the fullest.

The French are not giving up their more leisurely way of life without a fight. Unions protesting reforms in the pension plans paralyzed Paris starting on Thursday and the unrest may continue into November.

But I fear that as time goes by, gradually more and more countries will start to adopt our ways. And if they do, the cafe' life, the intellectual discussions over a glass of wine, the long vacations that other cultures enjoy, will become a thing of the past and eventually every country will be just like us. And that would be a sad day in the world.


Soon to be a thing of the past?
-A scene at La Palette, our favorite cafe' in Paris
(picture courtesy of http://hilton.org.uk/pppp.phtml). 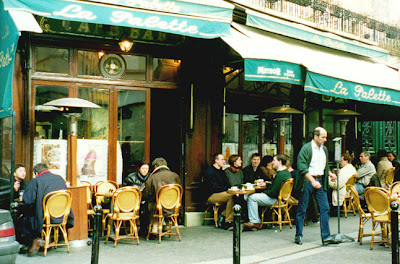 I wouldn't worry: this is the French we're talking about! No chance. And a good thing too.

Looks like Sarko is Bush's new poodle. If he is successful in this, there may be new elections in France in short order.

As of 1999, refusing one valid job offer terminated UE benefits in Michigan. I don' know if it's still the same.

The French will never give up their 3 hour cafe breaks. Never!

Seriously though, they don't want to turn into fat, over-worked Americans anymore than we do.

I hope you're all right that the French won't stand for this! As someone who would dearly love to adopt their way of life, the idea of them adopting ours is repugnant to me!

Future, probably not only is it still in effect in Michigan, but I bet some other states have started the same policy! Doesn't matter if the job is nothing that you want to do - you should get back there and be productive for the good of the almighty Economy! ;-)

As long as she wants the French to be like Americans, and she wants to decrease the unemployment rate, then they should do like our American President...lie about the rate of unemployment. Fudge the numbers! Be an American!!!

I just found your blog, but loved this post! I am in agreement with almost everything you said. I don't, however, think there is a great danger of France turning into a mini-USA. The unions have too much power for that to happen.

But yes, there is some danger in European countries moving towards lesser benefits. I think that would be a huge mistake, too.

I will definitely keep up with you.
Thanks!

This is about profits for the rich. And about destroying any quality of life.

Mary Ellen, good point, I'm sure that will be next, especially if her efforts don't pay off right away.

FranIam, so true. It is indeed about destroying quality of life, something Europe is much better at having than we are. Let's hope it's easier said than done.

Heidi, thanks so much for your comment, glad you found your way here!

There is no evidence whatsoever that our working longer hours in this country has improved our global performance one bit.

(Probably because we're spending too much time blogging. Snort.)

The French should stay the way they are. Sheesh.

Holding the US up as a model -- of anything -- is (sadly) laughable.

yeah we are a role model for the world

I have been to France and I loved it there. There is way more support for the Arts there than in the US. I am not sure if it is still true, but the US gives more support money to US military bands than to the arts.

It is harder being an artist in the US when you have to spend so much of your time just to make a living instead of creating.

It's damn Religion. The "Protestant Work Ethic," become a slave and God will let you into Heaven.

Slouching Mom and DCap, I agree - I don't see why any other countries would look at ours and think they want to be like us. It may have been true once, but not now.

Fairlane, you're right, it is the ol' Protestant Work Ethic. But now those in charge have taken that work ethic, applied it to capitalism, and made Money our new god. Hardly a way to get to heaven...but they don't see it that way.

Forgot to say, Cheryl (Hawaiivacationgifts), you're so right that the U.S. does not support the arts the way other countries do. And if the current administration had its way they probably wouldn't support them at all!

I think it's great that the French have realized they need to be more like us. Finally! They eat all this weird food with unpronouncable names and smelly sauces, and it takes forever to prepare. While they're sitting for hours in restaurants and cafes, waiting for their 12-course meals to be prepared, they aren't being productive. They could get so much more work done if they just get a Big Mac to go and eat it while they're driving to their next business meeting.

I have to agree with you. I think capitalism, and to a greater extent, Wall Street, are contributing to increasing American unhappiness and stress.

Well said, Tom! Sadly, they are eating more of that junk food than they used to...and I'm sure their rate of heart attacks will be going up soon as a result, especially if their stress levels increase.

Dorothy, that is what I think too. And the stock market is nothing but a big gambling ring these days so probably even more stressful than it used to be. You can't predict what it's going to do anymore than you can predict when a slot machine will hit. Which means us middle class people who have our 401k's in stock funds feel as if we have no control over them. And lack of control makes stress worse.