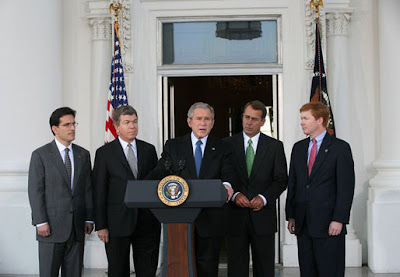 (Picture and quotes courtesy of the White House website.)

Our President was cranky yesterday. He appeared on the North Portico steps of the White House after meeting with the House Republican Conference, in order to whine about the performance of Congress.

After mentioning what a "constructive" discussion he'd had with Republican members of Congress, he went on to complain:

Hmmm, wasting time on investigations...let's see, does anyone remember Monica Lewinsky? Whitewater? Talk about a waste of time. And Congress wouldn't have to be trying to vote our troops out of Iraq if he hadn't put them there in the first place.

He then went on to whine some more.

"They've also passed an endless series of tax increases. You know, they proposed tax increases in the farm bill, the energy bill, the small business bill, and of course, the SCHIP bill. They haven't seen a bill they could not solve without shoving a tax hike into it. In other words, they believe in raising taxes, and we don't.

My, he has a short memory. It wasn't so bad when the Republicans were doing it, was it? What about back in 2003? According to this article, originally published by the LA Times,

"Before they took control of Congress nearly nine years ago, Republicans often mocked the Democratic practice of larding government spending bills with provisions that earmarked funds for pet projects in particular lawmakers' districts and states.

But a $328.1-billion bill that the Republican-led House expects to pass today, funding a grab bag of government agencies, takes earmarking to greater heights and uses it for what Democrats claim are new, partisan purposes.

The bill includes an eye-popping number of earmarks — around 7,000 by one estimate, at a cost of several billion dollars. Other spending bills bring the grand total for the year to more than 10,000. In that long list are items big and small, from $100,000 for street furniture and sidewalks in Laverne, Ala., to $44 million for a bridge to Treasure Island in Florida — a plum for the Tampa Bay district of House Appropriations Chairman C.W. "Bill" Young.

But more than that, to a degree unseen since their 1995 takeover, the majority Republicans are publicly flaunting their power to use pork for explicitly partisan purposes."

But that's not all. Oh no. In 2005, yet more earmarks and pork made it through the Republican controlled Congress: According to this Boston Globe article,

"At $286.4 BILLION, the highway bill just passed by Congress is the most expensive public works legislation in US history. In addition to funding the interstate highway system and other federal transportation programs, it sets a new record for pork-barrel spending, earmarking $24 billion for a staggering 6,376 pet projects."

This was the bill with the infamous "bridge to nowhere" in Alaska, among other perks benefiting that state. John McCain voted against the bill at the time:

"Arizona Senator John McCain, who voted no, called the bill a 'monstrosity' and wondered whether it will ever be possible to restore fiscal sanity to Congress. If 'the combination of war, record deficits, and the largest public debt in the country's history' can't break lawmakers' addiction to spending, he asked, 'what can?'"

And now Bush is moaning and groaning because the current spending bill has pork in it. The difference is, it is Democratic pork. So he's whining:

"We want to sit down in good faith and come up with a bill that is responsible, because Congress has been unable or unwilling to get its basic job done of passing spending bills...It's hard to imagine a more cynical political strategy than trying to hold hostage funding for our troops in combat and our wounded warriors in order to extract $11 billion in additional social spending. I hope media reports about such a strategy are wrong, I really do. If they're not, if the reports of this strategy are true, I will veto such a three-bill pileup. Congress should pass each bill one at a time in a fiscally responsible manner that reflects agreement between the legislative branch and the executive branch."

He complained one more time about Congress "not getting their job done" before closing his remarks by thanking the members who were supporting him.

"It would be irresponsible to not give our troops the resources they need to get their job done because Congress was unable to get its job done."

So, I call him a spoiled brat. When he gets his way, everything's fine. He doesn't mind when his own Republican Congress passes barrels full of pork, or if they investigate Democrats.

But if the Democrats try to do the same thing, "They don't play fair! They aren't getting the job done!" Amazing how he didn't veto one bill the whole time the Republican controlled Congress. But hey, their pork was OK.

Don't get me wrong; I am not a fan of pork and I would like to see reforms that would address this issue for both sides of the aisle.

But for this President to sanctimoniously complain about Congress "not getting its job done" and loading up bills with earmarks, when he is spending unconscionable amounts of money on his war in Iraq and refusing to sign bills to insure uninsured children, is more than I can stand. The hypocrisy is just amazing.

Tomorrow is the beginning of NaBloPoMo and I am going to participate. I don't think I've ever gone more than two days in a row of posting on this blog, so the idea of posting every single day of November is daunting.

Therefore, I will try to follow a theme. Political Poetry is my theme of choice. I am not a poet, as I've said before, but I am going to follow set forms, such as haiku, so I can't really go wrong. I've always wanted to learn how to write a haiku but could never remember how many syllables they have. So I found a nice definition online on this site.

I learned the form of haiku is not set in stone:

"What then is the form of a haiku? Some of the critical aspects of haiku form that have been mentioned are:

-brevity [one to three lines totaling 17 syllables or less]
-three lines -- some would insist of 5-7-5 syllable structure, some suggest a structure of three lines with 5 or less, 7 or less, 5 or less syllables.
-when read aloud, can be completed in one breath
-avoidance of traditional English poetic forms, such as rhyming and metaphor.
-juxtaposition … two elements or lines of the haiku indirectly relate to a third.
-descriptiveness ... haiku describe, they don't prescribe or tell."

So how about this as a start?

Bush is a 60 year old, insolent, petulent, sociopath, who still thinks his shit doesn't stink and the world revolves around his tiny pinhead.

About posting daily, it's challenging and fun. I try to work ahead whenever possible and I start early -- like 6am before I leave.

Pelosi and company may be afraid of him -- but no one listens....even when they say they are -- they arent....

so as christopher said -- he comes across as a whining sociopath -- or rather is.

may his after presidency be filled with misery and horror

This is excellent- wow.

Christopher and Dcap have already said it, but I will add this.

Dry drunk! Maybe not even dry. It is 100% addict behavior.

Christopher is right about daily posting... It is a challenge and doing it really early helps.

That is just not always possible.

Today was easy because of my approach. And it stars me and Dcap!!

Come on over kids!

I have already discovered posting my daily post while at work helps a lot! ;-) Saved me from that "Oh, I'm too tired to post" feeling late at night!

Also - agree totally, he's a sociopath and an addict. I only hope no one is still listening to him. I hope people see through his hypocrisy.