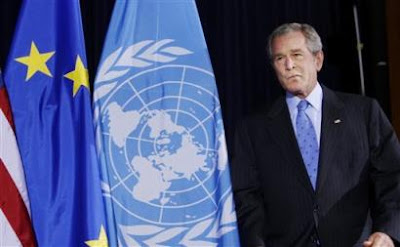 (Photo courtesy of The Associated Press)

According to the The Associated Press, Bush signed a stopgap measure Friday to keep the government up and running while he and Congress attempt to iron out their differences.

Dubya is objecting to the fact that the Democratic-controlled Congress wants to add $23 billion in spending for domestic programs to his already humungous budget ($933 billion). "The president said Democrats are planning the 'biggest tax increase in American history' to pay for the new spending."

In reality, the additions merely restore cuts proposed by Bush to important programs such as community development grants, health research and anti-crime initiatives. And $23 billion is a tiny drop in the bucket compared to the $189 billion Bush included for 2008 operations in Iraq and Afghanistan (and let's not forget what he might want to add in the future if he decides to invade Iran).

The sad thing is that the Wingnuts will eat it up, and the pundits will be out in full force talking about those "Spend crazy Liberals."

It's all so very boring and predictable.

"And Bush has the nerve to say the Democrats are "irresponsible.""
Yup! Actually obtaining money to pay for his waste is a tax increase to the Reich Wing. Expect more such impeccable math. After all - anybody that starts a war, and then cuts taxes can't be too mathematically inclined!

He has the dumb nerve to say anything...that's what is amazing.

Can we sign something to stop this idiot from doing anything until we can find an adult to replace him.

The man is a moron. It's no wonder he ran every single corporation he worked for into the ground.

Agree with you all. As Fairlane says, once again this will be spun that the Liberals are the tax-and-spend folks while the Republicans are the "fiscally responsible" ones.

I'm hoping this time the American people won't be as gullible as all the other times. But I am probably expecting too much of them.

Domestic programs? Hey, we have countries to invade and rightwing dictators to prop up. First things first.

The Democrats will probably back down as they always do, since they have such thin skins regarding what Bush says about them.

has there EVER been a more arrogant piece of shit ever????

Tom, well said. That's the way they think.
Larry, his is (sadly)likely to be true.
DCap - No, never!

I've never had such anger against one of our presidents before, not even Nixon.

Hey there Maui Grl. I'll be little bit off topic:

The scales of power are reversed.

No one's eating his tripe anymore.

You have to wonder where the money for the operation in Iraq would've had gone to if we never went to war. Would we have flying cars by now? Evil Spock blames Bush for Evil Spock not having a flying car.

There is not anything Congress can do about the veto expected by Bush .

159 Republicans voted against this bill and to sustain a Bush veto, the Congress must come up with 269 votes and they are just not there.

Hawaii Blog, Hi, thanks for your visit!

Christopher, now that he's vetoed the bill, Bush is pretending to be reconciliatory and saying he can get some more money for it, from what I heard on the radio. I'll believe that when I see it.

Evil Spock, I always wanted one of those flying cars on the Jetsons. We can blame Bush for not having those, or a myriad of other improvements in our daily life! How about bridges that don't fall down?

Let's Talk - it's frustrating that even with a Democratic majority they can't control what Bush does. The man didn't veto a single spending bill the whole time Congress was run by the Republicans, but now he's vetoing them. Funny thing how runaway spending is fine if it's done by his own party.