The Winter of my Discontent

I find it hard to believe that it was really necessary for us to have a 6-12 inch snowstorm on the Ides of March. But apparently that is exactly what is planned for us. Vague prognostications about rain that "might be mixed with snow" toward the latter part of Friday started being mentioned in the weather forecast a couple of days ago.

These vaguely unsettling comments gradually morphed, much like the transformation of Lon Chaney into the Werewolf, into a full-fledged Winter Storm Warning, complete with dire predictions of large accumulations of snow and sleet, always "higher in the northern and western suburbs." In this case apparently we count as one of the "western suburbs" and will likely get a good amount of the white stuff.

The sad thing is, we had two wonderful days of summerlike weather on Wednesday and Thursday. Heck, Wednesday it hit 80 degrees. I walked out of work into the parking lot with no coat on, and reveled in the warmth. The poet said April is the cruelest month but I think it should be March.

Today the robins returned to the lawn of the Big Corporation. This is a yearly tradition, much as the swallows return to Capistrano or the buzzards to Hinckley, Ohio. Every year during the first two weeks of March, a huge flock of robins shows up on our parklike campus. They hop all over the lawn, they perch in the trees. Then after a day or so of stocking up on worms, they seem to disperse throughout the area and only a few remain. This is the second time in the past few years that they arrived mere hours before a heavy snowfall. I hope they survive; worm eating birds are hard pressed to find worms through 8 inches of snow.

On a brighter note, I promised more details about our celebrations of St. Patrick's Day. We have a full weekend planned.

Friday night is our night out to celebrate in the appropriate fashion - going to see our favorite band, Paddy and the Paleboys (mentioned previously) at the Harp & Bard in Clifton, NJ. Conveniently, I was able to find a picture of them at the Harp & Bard, so I'd like to introduce you to them all.

On the left is Mike, the drummer is Bobby, Marty is the guitarist at right by the mike, and on the far right is Steve with the mandolin. Steve is amazing, he plays more instruments than I can even remember, plus he composes music. His main instrument is the fiddle; but he plays the "squeezebox," the mandolin, the tin whistle, the harmonica...and probably more that I'm not thinking of. 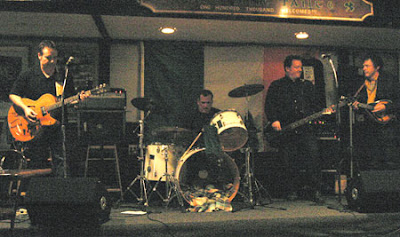 I suppose you could say our group of friends are...well...groupies of this band. We try to go to any of their performances that are not far from our location (I didn't say we were totally dedicated groupies...it's not like we're Deadheads or something). But we do try to go see them whenever we can, at the Harp or at the Shillelagh Club, which are in adjacent towns to us. I don't know whether a group of middle-aged Baby Boomers counts as groupies but it works for us, and for the band.

Saturday, on The Day Itself, we try to stay out of the bars (as someone recently commented, St. Patrick's Day and New Year's Eve are for the amateurs). So instead we are having a group of possibly 11 to our house for corned beef and cabbage. It will be a group effort; one friend bringing and cooking the corned beef and cabbage, we're doing appetizers and dessert, someone else is bringing sodabread, another is bringing the Jamieson's and the whipped cream for Irish coffee, and we will also be providing the Guinness and the Irish music.

St. Patrick's Day, for some reason, has always been a favorite holiday of mine. Even when I was in high school, I remember my best friend and I took off one St. Patrick's Day and did various celebratory things such as drawing shamrocks in green chalk on the street. (We were only 14, and immature for our age; I realize this was not all that exciting).

Then in college I had a really good friend who was Irish - from South Boston no less. She got me into the Clancy Brothers and Tommy Makem and we used to go see an Irish band at the bar down the street from us called The Farquahr. (That may not be spelled correctly). They not only sang Irish songs but also sang funny parodies of Irish songs. This was the beginning of my love of Irish folk music.

I should add, I do not have a single drop of Irish blood. The closest Celtic heritage I have is a drop of Wallace blood back there somewhere that at least accounts for my love of things Scottish. The Irish thing I've simply adopted. Plus DH is half Irish, so that counts for something!

The reasons I can truly say St. Patrick's Day is my favorite holiday are several: One, you don't have to buy anyone presents. Two, you don't even have to see your family (unless you want to). Three, it's an excuse to drink Guinness and Irish Coffee and see your friends and have a good time listening to Irish music and singing drunkenly along. You're not even required to cook (although you can!). So what can be better than that for a holiday?

With that I will leave you with an Irish toast:

Saint Patrick was a gentleman,
Who through strategy and stealth,
Drove all the snakes from Ireland,
Here’s a toasting to his health.
But not too many toastings
Lest you lose yourself and then
Forget the good Saint Patrick
And see all those snakes again. 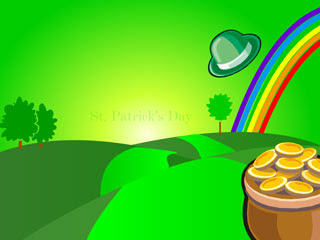 Sorry to hear about the snow. We have some forecast for Monday but not as much as yours. Have a great weekend....enjoy all the St Patricks Day fun. To join the over 50's Blogsroll you have to sign on here;
http://bloggerover50.blogspot.com/
Back soon
Rx

Hope you had a great Irish weekend. And here's a Gaelic blessing for you:
May the road rise up to meet you.
May the wind be always at your back.
May the sun shine warm upon your face;
the rains fall soft upon your fields and until we meet again,
may God hold you in the palm of His hand.