I knew I shouldn't have whined so much. Everything turned out OK. I took Diva bright and early Monday morning and the vet that was going to take off the growth looked at it and said it looks like nothing, to him. Maybe a wart. But since I was going away and you never know for sure if something is a mast cell tumor as they can look like anything, I decided to go ahead and have it removed.

Then I was wracked with guilt that I was putting the poor baby through all this just for my own peace of mind when it was probably nothing. My mind was racing a mile a minute, thinking "What if something happens to her and she didn't even need to have this done?"

Luckily at about 11:15 a.m. the vet called to tell me she was fine, was in recovery and waking up.

I was able to go pick her up after work and take her home. She has a big shaved place with a scar and stitches in the middle of it. She looks like a football. You know those stitched lines on the football? That's what my dog looks like.


Before I took her home, the vet and the technician informed me that Diva had chewed off not one, but TWO Fentanyl patches from her ankle. She was supposed to have this patch on her ankle for 5 days to

relieve pain. Since she insisted on eating them, they said she couldn't have one after all.

I was just as glad, because it would have meant she had to wear one of those awful Elizabethan collars, and it would have been so uncomfortable.

Plus I'm not convinced the Fentanyl is such a great idea; it makes them groggy and weird.

So I brought her home and she went and lay down on her bed right away. She whined a little, which made me feel bad, until I realized she was complaining, not telling me she was in pain.

What she wanted was Dog Dinner.

I gave her her dinner and she gobbled it down and then rested for the rest of the night in apparent comfort.

This morning she was totally back to her normal self, running around like a nutcase in the yard, barking demandingly for her breakfast...

I decided to work at home in the morning and then take her to the vet's for boarding on my way to work since I'm supposed to be going to Australia tomorrow. Before doing that I took her for a walk. Well, this dog was not being deterred from having the long walk that she felt was what she deserved to have. We usually use a special harness that prevents her from pulling. Well, because of the scar, I had to use an ordinary harness since it would hit her in a different place and not touch the scar.

When Diva wears an ordinary harness she immediately thinks she is a Sled Dog and pulls for all she's worth. 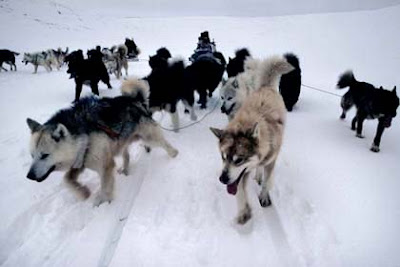 The other thing she does is put the brakes on. If she doesn't want to go where you want her to go and she's not wearing her special "Gentle Leader" harness, fuhgeddaboutit.

She particularly put the brakes on when she got into a snarlfest with another dog through a fence and wanted to stay and continue the conversation.

When I finally got home, I suddenly noticed blood on the floor! Turns out she had put the brakes on so thoroughly that she had scraped her back toenails and broken some of them!

So here I was, supposed to be taking her to the vet's for boarding, and feeling bad enough that I was deserting her with her newly-acquired scar on her shoulder. Now I had to bring her in with bleeding feet! I felt like a Bad Dog Mother.

Naturally as I was trying to blot up the blood she was running around as if nothing was wrong and making sure to step thoroughly on all of the rugs in the house.

I finally managed to get her to the vet's and get her settled there with all her special food and other equipment.

I then headed to work where I put in another 4 hours of work before leaving, finally, and meeting a friend for dinner!

I have now finished packing and the only hurdle left between me and Australia is...of course...the first snowstorm of the winter. It had to happen tonight and tomorrow. Right now it's sleeting but it may turn back to snow tomorrow afternoon just when my plane to LA is supposed to depart. Although there is a 3-hour connection time I have no doubt whatsoever I will miss the plane to Melbourne from LA and will end up spending the night in the LA airport...if I don't spend it at Newark airport first...
Posted by Mauigirl at 2/14/2007 12:45:00 AM

I really hope that the weather doesn't delay you. Have a truly fabulous time.
Rx

Must also add that I'm glad Diva is doing ok.

Thanks Ruth! I have made it Down Under. I arrived today in Adelaide. Hubby picked me up at the airport and brought me to this nice hotel (two-room suite with kitchenette!). He is now back at work. The weather cleared up just in time for my flight out of Newark to be able to depart only about an hour late so I made my connection in LA!