Science is Not an Opinion 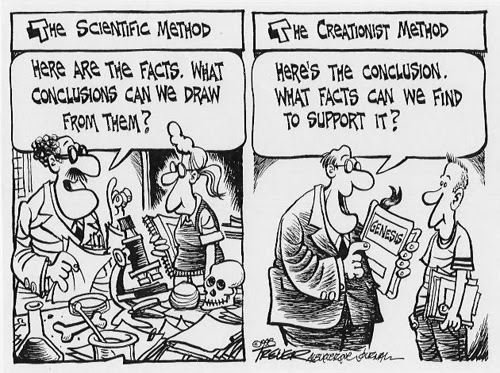 One of the things that really worries me about the "modern" (and I use that word loosely) Republican Party is the insistence by many of the party's members that scientific facts that others take for granted are merely matters of opinion - and not facts at all.

For instance, I really thought the question of evolution versus creationism had been settled back in 1925 with the Scopes Trial, which was widely seen as a setback for anti-evolution forces at the time, although the Supreme Court didn't rule on the issue until 1968, in the case of Epperson vs. Arkansas.

At that time, two states, Arkansas and Mississippi, banned the teaching of evolution in schools. The Court ruled that the Arkansas law

A 1987 Supreme Court decision also ruled a Louisiana law requiring teachers to teach creationist theory if they were teaching evolution was also unconstitutional, again based on the establishment clause of the First Amendment.

With the rise in importance of the Religious Right in the U.S. over the past few decades, teaching evolution as the accepted theory of how different species, including mankind, came into existence, has become a source of contention in many states. Some states, like Kentucky, have laws that allow teachers to teach creationism along with evolution at their discretion. Curricula in other states downplay evolution by emphasizing that it is only a "theory," or authorizing the teaching of alternative explanations.

One of the exasperating things about those who claim evolution is "only a theory" is their lack of understanding of the scientific method. The use of "theory" as it pertains to evolution is as a part of that method:


"A scientific theory summarizes a hypothesis or group of hypotheses that have been supported with repeated testing. If enough evidence accumulates to support a hypothesis, it moves to the next step—known as a theory—in the scientific method and becomes accepted as a valid explanation of a phenomenon."

It is all the more concerning that in a recent Gallup poll, 46% of Americans believe God created people and animals just as they are, less than 10,000 years ago, despite tons of scientific evidence to the contrary. People who believe this stuff come up with excuses to explain away the evidence, or to say the evidence is fake, or even say Satan is the one who came up with the idea that dinosaurs are millions of years old.

The even scarier thing is that the same percentage of college graduates believe this. And of course, 58% of Republicans.

And although, overall, 67% of Americans believe the earth is heating up, 85% of Democrats believe it, but only 48% of Republicans do. When you look at conservative Republicans, it's only 43% - and among those only 16% think it is happening due to human activity. 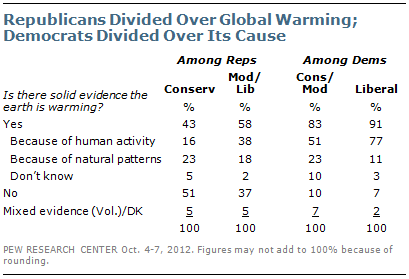 97% of scientists who have studied the issue agree that global warming is taking place as a result of human activity, and will cause catastrophic results during the next 100 years.

But the deniers either deny the existence of climate change, or else agree it's happening but is part of a natural cycle - despite the steep trend line of the warming. And many conservatives refuse to admit that the scientists agree, saying the 97% number isn't right or even saying that the earth is actually cooling.

But despite this winter's Polar Vortex that caused unusually cold weather across the northern hemisphere, climate researchers on Hudson Bay are reporting a continued reduction in Arctic sea ice, with open water periods lengthening by about 3 weeks just since the 1990s. And despite the chilly temperatures in the U.S. over the winter, global average temperatures in 2013 are nevertheless expected to be among the 10 highest on record since 1850.

And if you look at the trend by decade back to 1881, you can see the relentless climb in average global temperatures. The last three decades have been the worst, as developing countries, particularly China, have vastly increased their carbon emissions as they become more industrialized. 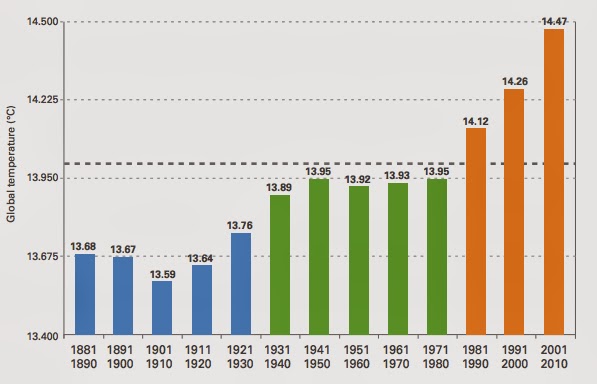 But you can't tell any of this to a climate change denier. They will just have more excuses why it's a hoax perpetrated by liberals.

And then there's another big group of people who are anti-science. These people are fervently against vaccinating their kids. This group comprises an unlikely alliance of lefties who feel vaccines are unnatural and dangerous, conspiracy theorists who believe the government is trying to poison them for some unknown and nefarious reason, and some right-wingers who think vaccinations are an example of government overreach.

As a result, diseases such as measles that were close to being eradicated in the United States are making a comeback. Most of those who are against vaccination don't even realize that diseases such as measles can kill people. They think the cure is worse than the disease, when that is emphatically not the case. If something isn't done, at this rate, polio could even come back. The problem is most people today weren't even around when these diseases ran rampant in our population, so they don't know what it was like.

The other problem with not vaccinating kids is the loss of "herd immunity," wherein the few people who aren't able to be vaccinated for one reason or another - or for whom the vaccine just didn't work - are protected due to the fact that the rest of the people they interact with have been vaccinated. Unfortunately, as the number of unvaccinated children rises, that herd immunity is no longer effective and the risk of contagion becomes higher for everyone. When a family refuses to have their child vaccinated, they are not only putting their child at risk, but they are putting others at risk as well.

Thankfully, there are some people who do see the light in regard to vaccines - see this blog post written by a young mother who had jumped on the anti-vaccination bandwagon, only to have the good sense to reconsider her views.

But many others will refuse to listen to reason. In fact, a scientific study showed that exposing anti-vaccine believers to evidence and factual information often backfired and actually decreased their intention to vaccinate.

In fact, for all of these issues, no matter how much you tell actual facts to people who have a strong belief about something, the less they listen. They claim you have been brainwashed, you have drunk the Kool-Aid, or are part of the Conspiracy.

Other studies bear this out:


"In a series of studies in 2005 and 2006, researchers at the University of Michigan found that when misinformed people, particularly political partisans, were exposed to corrected facts in news stories, they rarely changed their minds. In fact, they often became even more strongly set in their beliefs. Facts, they found, were not curing misinformation. Like an underpowered antibiotic, facts could actually make misinformation even stronger."

This means that there is no current solution to pull this country out of the abyss of ignorance. How do you argue with people who won't believe facts because they contradict their opinions?

Science is not an opinion. But until more people in America admit that, we will continue to fall farther and farther behind other countries that are a bit more rational in their beliefs.

I predict the era of American domination is nearing an end and we will fall into a dark age of sorts, while other countries take the lead into the next century.
Posted by Mauigirl at 3/14/2014 06:59:00 PM

You'd think that after enough of the creationist cases lost in the courts, school boards would recognize the futility of fighting science, but, nope, the yahoos who get elected to the school boards keep right on trying to drag religion into the classroom and making lawyers rich. If the anti-science types aren't willing to listen to the school board lawyers when they say "This is going to cost money and we're going to lose" then for sure they're never going to believe anything a scientist says.

As for the anti-vaccine movement, I think a big piece of it is that people truly have forgotten that measles and the other infectious diseases can kill people. Today's generation of parents have never seen an active measles case and so don't believe that it is as horrible as it actually can be.

I predict the era of American domination is nearing an end and we will fall into a dark age of sorts, while other countries take the lead into the next century.
Other countries already are taking the lead, especially in areas like energy. China and Germany are leading in solar and other countries are farther ahead in reducing the use of fossil fuels to produce energy.

creationism and YEC'ers, who are the same, are of fairly recent vintage...the 60's...before that, even creationists were not young earthers. I'm constrained to think tht a lot of this has to do with other prejudices like race and gender and and homosexuality. As science makes claims on these issues that diverge from people's biases, they have I think, just become more and more suspicious of science in general. Just a thought..

Nan, you are right, they just don't realize the danger of the actual diseases that these vaccines were invented to prevent. They grew up without them and have no memory of the fear people lived with every day that their child would get polio, or have terrible complications from measles, etc. I still remember having the measles and having to stay in my bedroom with all the shades drawn - apparently light was bad for the eyes and could blind you somehow. Kulkuri, yes, we are already definitely behind in many areas. It is only the power of our military that still keeps us in control of things, I guess. But, like Rome, that too will fall one day. Sherry, agree, I think that is a big part of their rejection of science.

I went through the having to stay in a darkened room, too. That was so long ago that doctors still made house calls.

HOME RUN!!!
You hit this one out of the park. I agree with you on all counts. And I find it all so infuriating.
As for the cold winter this year--actually, the cold dominated the eastern part of the U.S. The west coast has had a warmer than usual winter and much much drier. They are facing serious water shortages because of lack of rain and snow.
Finally, I too share the concern that we are entering a dark age. And like the former dark age which fell over Europe, it will be another country or another culture that will preserve true knowledge.