I am still here fighting the good fight... for dogs! 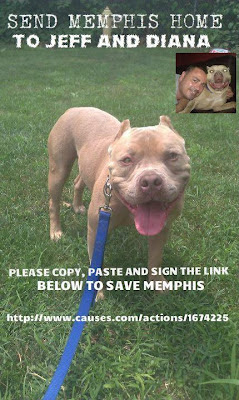 Sorry for the long absence from the blog world. I have been caught up in some local issues and am trying to save a pit bull named Memphis that is being held at the Bloomfield, NJ shelter without opportunity for adoption despite never having bitten anyone since he has been at the shelter.

This dog came in as a stray in February, and the shelter manager, who is herself a dog trainer, but not familiar with pit bulls, felt he had issues that needed to be resolved.

She sent him to be evaluated at an animal welfare organization called St. Hubert's, where he was deemed "an accident waiting to happen," due to his responses to other dogs and to strangers who approached him in a threatening or scary manner. He did, however, act very friendly to a stranger who approached him and greeted him.

At this point, the dog had been found wandering as a stray, probably abandoned by his original owner, and then kept in a cage with only limited interactions with the outside world for several weeks. Of course he was nervous and over-reactive.

The shelter manager continued to work with him, but never felt she could trust him despite the fact that shelter volunteers and others who met Memphis said he was friendly and had never shown any signs of hostility to them.

Finally a well-known local trainer and pit bull rescuer, Jeff Coltenback, who also runs a pet store in our town, offered to take Memphis and work with him to ensure he could pass the temperament test and be adopted out. He had hoped to take him on permanently as his rescue is a registered 501(c)(3) rescue organization, but instead the local Health Department insisted he only keep him to train him and made him sign a long agreement which included stipulations on what he could or could not say about the dog's training, among other details.

To make a long story short, although Jeff did not comment on the dog's training, he did put up pictures of Memphis with other people, including children, on his Facebook page, and the Health Department demanded after 8 days that he bring Memphis back to the shelter, as he was "putting the public in danger" and it could be a liability for the town. As you can imagine, he was doing nothing of the sort.

In fact, Jeff said he only exposed people to Memphis who agreed to work with him, Memphis was supervised at all times, and he said that this is the way he always works with dogs that need socialization. Furthermore, he said since Memphis had come to him he had seen zero evidence of any dangerous traits. The dog gave him no cause for concern or any need for correction during the eight days he had him.

In fact, because of Memphis' friendly and winning personality, Jeff and his family fell in love with the dog and now want to adopt him. Since Memphis was returned to the shelter over a week ago, he was given another behavior test, and his future is now an item on the agenda of the Board of Health meeting tomorrow night. Even though the Health Department must have received the written results of the behavior test by now, they are not revealing the conclusions until the meeting takes place.

The story of Memphis has gone viral, thanks to social media, Examiner.com and Facebook Causes. I know many of my blog friends are fans of pit bulls; for those who are not, please understand this is a good dog, a family dog, who deserves a loving home. Being with a professional trainer and rescuer who loves him would be a perfect solution for him. How could anyone deny him this happiness? Please see here for further information about Memphis and his plight.

I will try to get back into the political scene shortly; as always, I have been following what is going on and am appalled at the choice of Paul Ryan as Romney's running mate. On the plus side, it gives President Obama plenty of fodder to work with. No one can say this is an election without stark differences between the two sides.
Posted by Mauigirl at 8/15/2012 06:14:00 PM

Politics...saving dogs. Saving dogs...politics.
I'd say you picked the more rewarding issue.
Much as I adore following politics, I find my blood pressure rising every time I see the Republican ticket holding forth on tv.
Give me dogs any day.

KGMom, I know exactly what you mean. For some reason this year I have found it hard to watch the political maneuvering and listen to the pundits, etc. Each Republican candidacy is like a rerun of the last and I get tired of hearing the same old thing year after year!

You are to be commended for your dedication to dogs. We just adopted a sweet border/spaniel mix and he is quickly becoming the delight of our lives. Bless you for your efforts.

Memphis is far more important than Paul Ryan.. as long as the latter does not actually become Vice-President. Do your good words for that beautiful dog and the blogosphere will be here when you return.

Nice article, thanks for the information.

At this point, the dog had been found wandering as a stray, probably abandoned by his original owner, and then kept in a cage with only limited interactions with the outside world for several weeks. Of course he was nervous and over-reactive.Canine Cataracts

Angelina produced that checklist? that dress is awful. not just is it boring but it makes her appear like she's trying to cover up the truth that she looks emaciated. her shoulders are so bony it looks like she left the hanger in it. she normally looks wonderful. cam buse