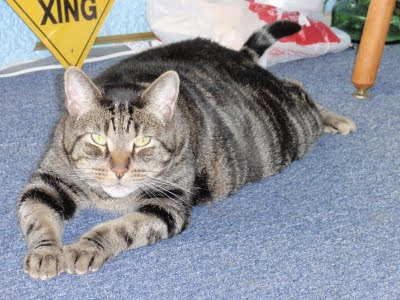 Baxter here. Many Apologies, over a Week has passed since the last Post here. My Female Human has been busily making Arrangements for her Mother, who came home from the Nursing Home yesterday. My Human's Mother is Very Happy to be back in her Own Apartment and seems to be doing Very Well, considering her Age and Condition. A Nurse's Aide comes in to watch her at Night, and during the Day my Female Human will be there helping her.

All this is All Very Well, and I have Nothing against the Female Human's Mother. But for Me it is NOT an improvement. I was just getting used to having more Company around Here, and whenever That Dog was out in the Yard or Asleep I got to cuddle up on the Couch with my Human. Now she is gone All Day again just as she was in the Old Days when she did what she called "Working." From what I understand, she says what she is doing NOW is Work too!

That Dog is probably not Happy either. She is stuck in the House. However, at 4 p.m. the Female Human's Aunt comes down to her Mother's Apartment and sits there while my Human comes home and walks That Dog. Still no help for Me, but what can you do.

But I digress! You don't come here to hear about my Female Human's Personal Issues. You expect More from an intelligent Feline like Myself. So without Further Ado I will launch into my usual News Summary.

Of course, the Big News is the Passage of the Landmark Healthcare Legislation. Or Historic Healthcare Legislation, however you want to put it. As Most of You are already Well Aware, on Sunday night the House passed the Senate Health Care bill that had already passed before the New Year. They then went ahead and passed a bunch of amendments to it, which the Senate then had to Approve. And, with a few changes, they did. The last step was that the House then approved the slightly changed Reconciliation Bill that will put those amendments into Effect.

The Best Moment before President Obama spoke at the Signing Ceremony was when Vice President Biden uttered the Now-Famous Phrase, "This is a Big F*cking Deal" in the President's ear just before he turned the mic over to him. T-shirts are being sold as we speak.

Right Now my Ears are twitching and my Whiskers are bristling, however, because MSNBC is televising the speech Sarah Palin is making at a big Rally for John McCain. I must say, that Woman's voice goes right through Me! "Send the Maverick back to the Senate!" she says. Ugh.

In Other News, the Radical Organization, PETA, has enlisted the So-Called OctoMom to support their cause of promoting Spaying and Neutering for Pets. It's Bad Enough that this Female Human had, via Artificial Means, eight babies at once when she already HAD six kids; now she's so desperate for Money, she's willing to let PETA put a sign on her lawn? Check it out:

In return, OctoMom gets $5000 a month and some veggie burgers and dogs to feed her "Litter." No, I am not being Crass. The word "litter" was on PETA's BLOG for Heaven's Sakes, with a line drawn through it. Go see for yourself.

In other Animal-Related News, a video is Making the Rounds on TV and the Internet that shows a Pitbull Mix (reported in varying ways by the Media, including calling it a Bulldog, a Pitbull, a Pitbull-Boxer mix and a Pitbull-Bulldog mix) attacking a Police Car and ripping off the Bumper and wrecking the Tires. Here is a news Clip with part of the video, if you have been Living Under a Rock and haven't seen it yet:


Now, as you All well know, as a Cat, I am not a Fan of Dogs, but would never wish them Harm. So I'd like to commend the Police in this situation for trying pepper spray and a Taser to stop the dog instead of just shooting him. The dog's name is Winston and he is actually very nice to People and didn't even attack the Officer who got out of the car to spray and Taser him. (Please note, the Taser hardly slowed him down at all - so don't expect one of those Electric Fences to ever work on your pet Pitbull.)

The story does have a Happy Ending because the Dog is just under probation and the Owner is to get him Obedience training to get his Canine Good Citizen certification.

As for the damage to the Squad Car: I would be Concerned, if I were the Police, that their Squad Cars are so fragile the front bumper can be totally removed by a Dog! Shouldn't vehicles be a little more Sturdy than THAT? I'll bet the Dog wouldn't have made a dent in my Humans' old 1955 DeSoto that they used to have! That was when Cars were Cars and were Meant to Last! 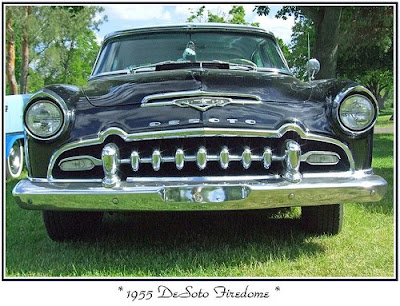 Speaking of Cars, there is Good News out of Trollhattan, the location of the Swedish Headquarters of the new Saab-Spyker company. They have started shipping their first Batch of New Cars under the new Ownership! Plus, they're cutting Prices! It just might be time for a New Car for my Humans. We'll see if they are Tempted.

So, that is the News for this Week. I know I haven't covered Every News Item but these were the Things I wanted to share with You personally.

I'm glad that Baxter is keeping up on things so I can come here and read instead of having to listen to the voice of Sarah Palin.

Having just gotten through a real boring evening at home, I crawled out from under my rock and watched the dog rip off pieces of a plastic covering that Detroit uses these days so they don't have to chrome the bumpers. You're right, the old DeSoto would have knocked out some of that dogs teeth! They just don't make 'em like they used to.
As for the health care bill, I hope it works. The Rethugs are doing the fear thing and telling everyone we're Socialists now. Idiots. We've been socialists since FDR. I mean, what the hell do you think Social Security taxes are for? .
Sorry your Hiuman has to do that chore, but I know that giving of ones self for the good of another is a good thing in the long run. I'll send some positive vibes over to the Human one and wishes that you get petted more often. My feline complains too when the dogs come to visit. I can't imagine having to live with one.

Well! Glad you are able to help your Mom, and that kind of "work" takes it out of you. It's emotionally draining, because you care & worry & wait. But the fact they sent her home, means she's turned a corner & stable.
I am hashing it out with my sister over Mom's meds-- thats a whole post in & of itself.
I guess I have been living under a rock, because I had not seen the dog using a bumper as a play toy vid.
See now if General Motors were smart, they would market vehicles as ultimate dog play toys, and sell some rigs that way. Plus it would appeal to lazy Americans.

The "face" of the DeSoto car looks like a teeth baring dog!

Be glad you are a cat Baxter- because you never have to do what I will be doing this weekend-- TAXES.

Hey Bud!! I'm glad to hear that Mimi's mom is doing so well. Try to tolerate it, if you can. maternal bonds are more important to humans than to most species.

I'm depending on you to hold up feline honor while your human is gone. That means it's up to you to keep that dawg in proper subservience to feline superiority.

If the dawg gives you too much trouble, take two catnip and call me in the morning.

I know how sensitive a cat's ears are. Please, let me give you some unsolicited advice: avoid, avoid, and avoid, all videos of Sarah Palin braying and yelping her way across Nevada on Saturday.

Besides sounding like she is a stark, raving lunatic (which she is), her voice led many people to jab ice picks into their ears to make it stop. Seriously, McCandy has the worst voice on earth.

The truly funny thing is, these Teabaggers called the gathering Searchlight, NV a "conservative Woodstock." But as one of my long time readers pointed out, there was no booze, pot, music or sex, so another Woodstock?

What an absolutely delightful post. I thoroughly enjoyed this read and it made my Sunday morning. Good luck with your mom.

Hi Baxter. Tell you female human hello for me and that I wish her and her mother the best.

Thanks for your insight, as always. That Sarah Palin person has no scruples at all about playing the fear card.

okjimm and Amanda, Baxter is a fine figure of a cat who weighs 22 lbs. He likes to say he's "Big-Boned."

Lisa, Baxter is glad to have been of service.

Spadoman, thanks for sending the good vibes. So far my mom is doing well at home. As for the "socialism" accusations, many of the Tea Partiers are saying inane things like "keep your government hands off my Medicare." They just don't get it, do they?

Fran, Baxter thanks you for your comments on his post. Good luck with your mom's meds. It's hard to regulate them in the elderly, that's for sure.

TomCat, thanks for your support of Baxter. He will keep the "Dawg" in line. Also, will be over to PP, thanks for the award!

Christopher, I agree completely about Sarah Palin and the Woodstock non-connection. You're right, how can there be a Woodstock with no sex, drugs and rock and roll?

MadMike, glad Baxter brought a smile to your face!

Ruth, thanks so much for your good wishes about my mom. And Baxter appreciates your compliment on his insight.

Make sure he does, Mimi. Feline ferocity may be needed. And you're most welcome.