The First Week of the New Era of Hope

I haven't been in the mood much to post this week because everything is going so well. The euphoria of President Obama's inauguration hasn't worn off yet and there is very little to complain about so far.

DH and I took Inauguration Day off and spent it celebrating the inauguration. We attended a gathering of like-minded Democrats at a local restaurant to watch the inauguration. I brought my camera, as did a number of other people. I didn't get very many good shots of anything but here are a couple that didn't turn out that badly.

Here is a view of some of the attendees raptly watching the wide-screen TV, and another of the TV when President Obama was taking the oath of office. 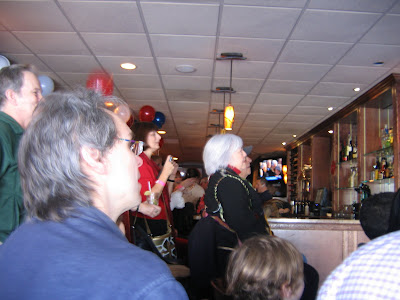 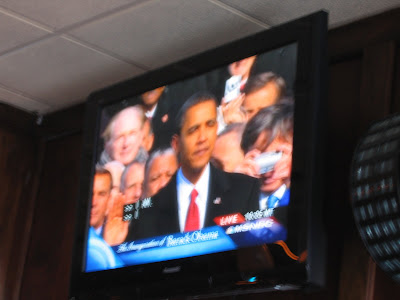 I have been happy to see that President Obama has immediately begun carrying out some of his promises, such as signing executive orders to close Guantanamo, implementing ethics rules regarding lobbyists, pledging a more open and transparent government, and more. He is working on getting the economic stimulus plan through Congress and reaching out in a bi-partisan way to Republicans even though the GOP doesn't really need to sign off on this bill in order for it to pass.

People are feeling hopeful and his approval ratings so far are very high - in fact, at 83%, substantially higher than either George W. Bush or Bill Clinton at the end of their respective transition periods.

Not everything is perfect, and we need to keep an eye on things. For instance, President Obama has waived the effect of his ethics rule for one particular appointment - his deputy defense secretary.

Rachel Maddow has started a segment called "Scrub, Rinse, Repeat," which chronicles the steps President Obama is taking to reverse the worst abuses of the Bush administration. She is also keeping an eye on lapses such as the above appointment that don't quite live up to the ideals the President is espousing.

She has also noted in a recent show that the stimulus bill doesn't have as much spending on infrastructure as he makes it sound. We can all hope that the tax breaks that are included may be cut back somewhat in order to allow more spending where it will really make a difference. Getting GOP support for the bill isn't as important as getting the bill right, as she points out.

In terms of foreign policy, apparently China is annoyed because of a couple of things that have been said. The Chinese powers that be cut off the President's inaugural address to their television viewers when he mentioned that Americans had "faced down communism" and a later remark about the Chinese possibly manipulating their currency (made by Treasury Secretary nominee Timothy Geithner regarding a belief of the President's) didn't go over very well either. But this is a minor speed bump and I'm sure as the administration gets its sea legs this will be smoothed over. Perhaps Hillary will go to China and make nice to them!

All in all it has been a good first week and I am feeling very optimistic. I had forgotten what it felt like to have a President I could actually believe in, someone that seems to know what he's doing. It is very refreshing.
Posted by Mauigirl at 1/24/2009 04:28:00 PM

It has been a good week! I love that whole "scrub, rinse, repeat" thing too.

I'm glad to see President Obama starting off strong, doing what he said he would do and even doing some things I didn't really expect. It was a good week and I look forward to what comes next.

I think your picture of the people watching the oath is a great thing. You've captured a historic time in that picture.

About William J. Lynn, he wasn't Pres. Obama's pick... if you look at the article it says and I quote "Defense Secretary Robert Gates, who requested Lynn as his deputy" So, the President is trying to keep Bob Gates happy and so had to file the waiver and break his own ethics rule. Now he is catching all the flack for it, but it is Gates who has requested him. So it is Gates who should really be getting the flack not the President.

yeah...it has been an amazing week...and now we will see what happens next- but seeing some of his promises- started to be fulfilled within 3 days- i would have never perdicted that...wow..

We spent almost the whole day watching too. And it's been wonderful to see him roll up his shirt sleeves (literally) and put things in action immediately.

I think he'll do a great job. Hell, he's done more in one week then Bush has done in 8 years in terms of progress for the better.

I guess we have to trust Obama on a judgment call with Lynn.

It does disturb me to see the old style lobbyist helping run the military industrial complex.

I certainly trust Obama more than McCain to keep Lynn on a leash, though.

Apart from that issue, our man's off to a great start.

I'm taken aback by how much Obama has managed to accomplish in the course of a single week.

I thought turning back the evil and chaos of eight years of Bush/Cheney would take longer but Obama is off to a splendid start.

If he can get the economy revived, repeal 'Don't Ask, Don't Tell,' and get the troops out of Iraq while resisting the neocon/Hillary push to ramp up our involvement in Afghanistan, then as far as I'm concerned, his first term is already a success.

I'm hoping he continues to keep us updated as to all his thoughts and progress in the White House. I didn't vote for him however it appears he is the better man.

Keep us updated I love how you articulate the current events I learn a lot from your site..

Did you vote for McCain?

I'm curious how you feel about McCain saying he plans to oppose Obama's economic recovery/stimulus package?

You spent Inauguration Day in the best possible way! Alex and I watched the festivities on TV all day. I wish that the cat had taken more interest in them or that I had had some like-minded humans around me to join in the celebration!

I recognize that not everyone is going to be happy about President Obama's actions. I pray that he will continue in the same vain, which seems to be the way I preached sermons: the objective was "to comfort the oppressed and oppress the comfortable."

Sounds like you had a wonderful time at the Inaugural party you attended. My employer did one of the nicest things I've evr seen in allowing employees who came to work to watch the event in any conference room with a TV and in our cafeteria. It was a great day, indeed, and I'm glad he's moving forward with some of his promises, particularly the ones that undo Bush's trampling of the Constitution.

I was lucky to start work just AFTER the inauguration, so I was able to watch the heart of it @ home. It was an historic event & interesting to hear comments from random people in the crowds. Some saying there were there to represent those who fought earlier for civil rights, but did not get this far, or could not attend.
I attended a watch the inauguration party later in the day... it was also a birthday party potluck. The centerpiece on the table was a large Bush head mask with a cowboy hat on.
People were euphoric & really liked the themes in the speeches & the benediction.
Warrens invocation was weird, and the poem recited after Obama's speech were, underwhelming.
Lowrey's benediction prayer was great.

I know it is a big celebration, but it does seem a bit over the top. 10 inauguration balls? $170 million is a bit much, considering the recession we are mired in. I'd like to see it taken down a few notches in the future. I'm an optimist, but also a realist.
Glad Rachel is also doing reality checks.

I'm thrilled Obama is at the helm, but we have to
help keep him on the right track too.

Remember-- lots of people are immersed in the aftermath of the Bush years- as in unemployed and struggling, my family included. People without healthcare and or jobs or housing, see this from another perspective.

It has been a good week for our new Pres. I still worry about the crappola Bush pushed through in his final days.

Obama could work 7 days a week and still not fix all BushCo's screw ups.

Good so far! With Bush gone, I've been bereft of blog fodder. Nothing to gripe about for a while, I hope.

I too am rather happy this week. He will be opposed by the Republicans no matter how much he tries to make things bipartisan. To Republicans bipartisanship means they get everything their way apparently!

Like those before me (in the coments) it has been one amazing week. Now if we can blast John Boehner into outer space, I will be content.

Hi all - have been swamped at work but have read everyone's comments! I continue to be excited by each day's accomplishments. Great news on today's signing of the equal pay legislation!

It does annoy me that not ONE Republican voted for the stimulus package - after Pres. Obama went over there and tried to make nice to them. (Agree with TheMom about Boehner). MSNBC last night was saying perhaps the final bill will garner some GOP votes when they can say it has changed enough for them to support it.