As promised, I'm posting the pictures of the trolls festooned around our living room. In this picture you can see them on top of the revolving bookcase and the neighboring table. 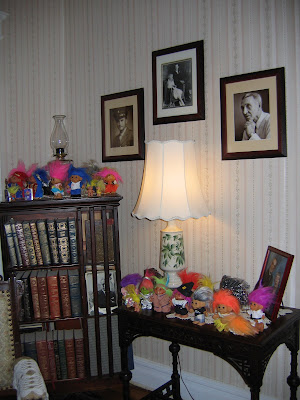 Here they congregate on the radiator cover, next to my great-grandmother on my father's side (in picture to left). 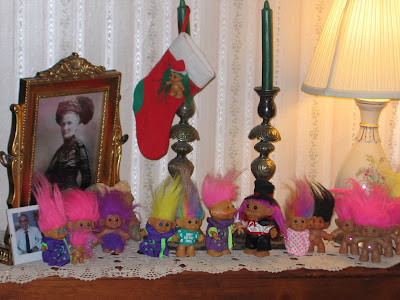 Here they gather on another side table, up against a picture of me as a baby in several poses. (DH rescued this treasure from my mother's house when she was moving and decided it belonged in the living room. I am not sure). 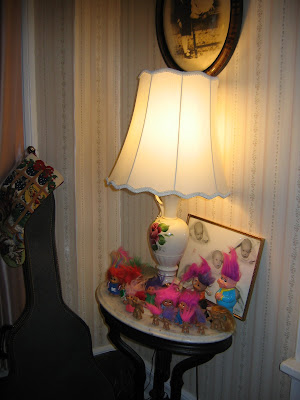 And here they are, in all their glory, on the piano. Most of the ones in this group are the oldest trolls I have. I began collecting them when I was 9 years old, back in the early 60's. The one with orange hair, in the middle, in the second row from the bottom, is Samantha - my first troll. 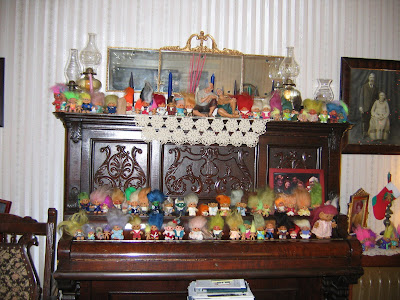 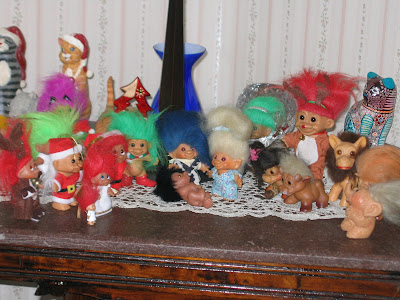 And, just because it's time for a picture of Diva, here she is - wrapped in her blanket, lying on our bed and ready to go to sleep. The blanket is actually the colors of the flag, which is faintly sacreligious, I realize, but someone gave it to us, and Diva loves the fleece. So it belongs to her. Being a short-haired dog she needs to keep warm at night! And after all, she is an American Pit Bull Terrier, so maybe it is appropriate after all! 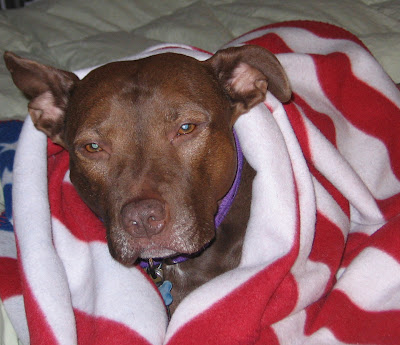 Post-Christmas haiku:
Friends and family,
Together at Christmastime
What more could you want?
Posted by Mauigirl at 12/26/2007 02:22:00 PM

Belated Merry Christmas! Wow, what an amazing troll collection you have! Your dog has such a sweet face!

Wow,I sure loved my trolls back in the day!

And your troll Nativity! Wow, I love it.

Aw, I love it! I have never seen that many trolls in my life in one place ;)

I had a beloved Pit for years who died of cancer..I miss her every day. Sweetest dog in the world..her name was Baby.

Hi Kuanyin, thanks! The funny thing about the collection is, I got about 1/3 of them in the past five years or so from people seeing them at garage sales and buying them because they knew I collected them! I've also picked up some "vintage" ones from the 1960's at antique stores. My original group from the 60's numbers about 65 or so. Altogether I have about 150 now, counting the little tiny ones.

Phydeaux and Fran, glad you liked the display! ;-)

Dusty, welcome! So sorry to hear about your Baby. We lost our last dog, Alice (a Pit/Lab mix) to cancer two years ago so I know how sad that is. It was because she was part Pit that we decided to adopt Diva from a pit bull rescue organization - we had fallen in love with the breed. They are such great dogs.

(Because Alice was part Pit, that is. Diva is ALL Pit!)

Revolving bookcase? I love it and want one. And your piano is great! You and the trolls share wonderful quarters!

Happy holidays and best for '08!

Thanks Femaledoc! The revolving bookcase belonged to my grandfather and when my mom moved she let me have it. The piano my husband picked up at a house sale years ago before we met. We love antiques.

Best wishes to you for the New Year!

Wow. You have issues. You have a troll problem. You need help! Don't go into denial. I'm sure some shrink somewhere has seen this mental affliction before, there is hope.

;) Just Kidding. So many. I guess we all have our "issues", I certainly do.

Does anyone play the piano, or is that just a troll display?

Diva looks so comfy! great Pic, I love pit bulls, they get such a bad rap because a few people that have abused them, they really do have great temperment (sp?) and make great family pets.

Mauigirl..Baby was pit/lab as well. Most wonderful dog I have ever had. Sweetest disposition in the world.

LOL, Nick, yes, we all have our little quirks! ;-) As for the piano, no, unfortunately, neither of us play. My dad was an excellent pianist and tried to teach me how to play when I was a kid but it didn't work out too well. (They should've hired somebody else to teach me, who wouldn't have father-daughter issues to contend with!). He used to play our piano when he came over to visit but sadly now no one does.

Diva is the sweetest dog ever. She loves every person she meets and wags at passing cards in hopes they will stop and say hello to her. She does love her comfort, and feels it is her right and duty to take up most of our bed every night!

Dusty, our girl Alice was a great dog as well. She was practically human, the way she communicated and understood things. A Pit/Lab mix must be a good combination to produce such great dogs. Alice could be cranky once in awhile (you couldn't try to take a bone away from her!) but her intelligence and ability to empathize with us were amazing. And she was wonderful with all of our friends' kids.

That was supposed to be "wags at passing cars," not cards. I must still be on holiday mode!

i love pit bulls -- that is the sweetest looking dog

Hi, this is not so related to your page, but it is the site you asked me 1 month ago about the abs diet. I tried it, worked well. Well here is the site

Hmmm, I do declare I think I've gotten my first spam. I don't believe I ever asked anyone about an abs diet! (Not that I couldn't use one, LOL!) I truly have arrived!

The dog is so adorable!

Are those a few white chin hairs on her face???

I love dogs. Ours, Ginger, is an 11 year old Lab and very much the cnter of attention and the focus of our household.

At least those trolls aren't on the internets!

Geez...I'm losing my mind, I could have swore I posted a comment here yesterday. I probably started one and didn't finish because I kept getting called away from my desk.

I did comment on your dog who looked like she was ready for a long winters nap. She's adorable, I just love dogs!

Regarding the trolls, I think I have some packed away in my storage area. My kids had them when they were young. I never collected them myself. However, every once in awhile I'll find one in the toy bin I have for my grandkids. I don't know how they end up there.

Ok...I found the comment I wrote yesterday...on the wrong thread, of course. I swear, Mauigirl, I'm getting too old to blog.

DCap, thanks, she lives up to her appearance and loves everyone!

As for the chin hairs, she has had them since we got her, and we asked the vet if it meant she was older than we thought, and the vet didn't think so as her teeth are those of a younger dog. She said it could be she just has white on her chin, or she's prematurely gray! Diva is probably about 6 years old now although we'll know for sure.

Randal, these trolls are the best kind to have, for sure!

Um, that was supposed to be, "we'll never know for sure" how old Diva is.

Mary Ellen, I am also getting "too old to blog," LOL!

Mauigirl, thanks for your comments over at Jonestown and my place! I really dig your blog and I've added you to my blogroll. Your Diva looks a lot like one of mine. We've got four: an English Staff Bull Terrier mix, two Pit mixes, and one full Pit puppy. I love the animal activism you're doing on your blog and look forward to more of your puppy pictures!

Thanks so much Suzi! I'm adding you to my blogroll as well.

It's great to know you're a fellow "bully breed" lover!

Dang Maui. It's a good thing you don't have that many trolls on your blog!!

You said it, Tomcat!

look at the trolls! impressive!

wow....these are wonderful...I used to have trolls, loved them...btw I am adding you to my blogroll , hope you don't mind....

( do they reproduce at night- is that how so many came to live with you?...)

I have SUCH troll memories! Thanks for reminding me. But the very, very best, is the troll nativity. It takes a great mind to come up with that. Cheers mz maui, and may you have a fabulous 2008! Thanks, by the way, for your interest and support in 2007.

Slouching Mom, thanks, they are more impressive than I ever intended! People keep giving them to me!

Enigma, thanks so much, I'm honored you're adding me to your blogroll! I'll add you as well! (And I have no idea what they get up to at night...they're always back in the same place in the morning. But last night SOMEONE knocked over a large platter that was sitting on my radiator in the dining room for ages. For no good reason it crashed to the floor at 4 a.m. So the trolls may be up to something in the middle of the night!

OMyWord, thanks, glad to have brought back good memories of trolls! Have a wonderful 2008!

I love your dog all snuggled up, he is lovely. Sorry just been reading through your blog and catching up!

And your troll collection is fab! So many trol memories. I remember I washed my troll's pink hair with toothpaste at my Auntie's house! I also remember they had a funny strong plastic smell too, and their feet were huge and so solid!